My Show Off: Gangtey Couple 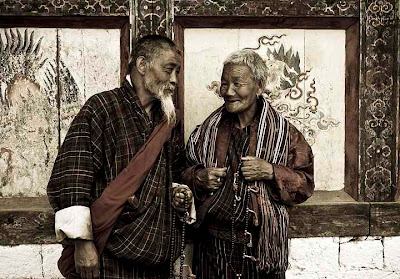 Photograph © Tewfic El-Sawy-All Rights Reserved
Here's a photograph of an elderly farming couple at the Gangtey Goempa monastery, who were quite excited to attend the festival's rehearsals. It was rumored that the King of Bhutan would be attending the actual festival the following morning. The valley of Gangtey is one of the most beautiful in Bhutan, and the Gangtey Goempa monastery is the only Nyingmapa monastery on the western side of the country's Black mountains.

While I like this photograph for its humanity, I wish I had the presence of mind to move to the right of the couple to avoid having the wisp coming out of her head. In the heat of photographing, one frequently misses seeing extraneous background stuff. I don't think it spoils the photograph, but just one step to the side would've made it better.

In any event, I photographed the husband and wife for a few minutes and they were stiff as boards. However, once I relayed to them that they had to look at each other as if they were still both in their twenties, this is the result. It didn't take much to persuade them...the affection that these two Bhutanese farmers have for each other was immediately obvious.

Email ThisBlogThis!Share to TwitterShare to FacebookShare to Pinterest
Labels: Bhutan, TTP Show Off