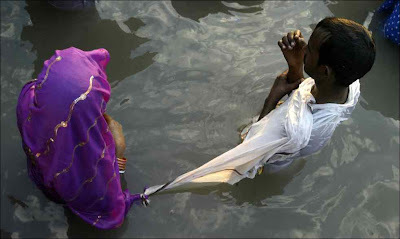 Photograph © AP / Bikas Das-All Rights Reserved
The Sacramento Bee website has recently joined the list of large-image blogs with its The Frame. Two of the others are the Boston Globe's The Big Picture and WSJ's Photo Journal.

The Frame has featured photographs of the Chhat festivities in India last week. Hindu devotees worship the sun god and fast all day for the improvement of their family and society during the festival.

Chhat is celebrated twice a year, once in summer (May-July), called the Chaiti Chhat, and once during October-November, six days after Deepawali, called the Kartik Chhat. The first day of Chhat begins with a ritual bathing (preferably in the Ganges River), followed by a period of abstinence by the worshipers. Photographs are by a number of photographers such as Altaf Qadri and Bikas Das among others.

I expect more large-image blogs will be imitated by many newspaper websites across the country. I don't know how these will be monetized other than through accompanying adverts, but they certainly are an excellent platform to show off work by deserving photographers.
Posted by bella at 3:52 AM