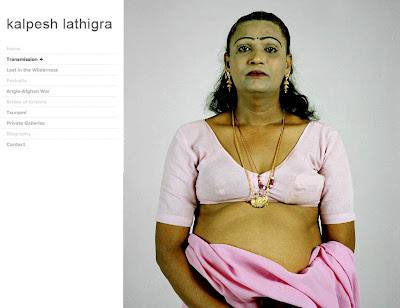 Photograph © Kalpesh Lathigra-All Rights Reserved
As previously noted in The Travel Photographer blog (see below for link), Kalpesh Lathigra is an enormously talented London-based freelance photographer, working for most of the United Kingdom's newspaper magazines, including the Sunday Times Magazine, and The Independent Magazine. His work ranges from photographic essays of the American Midwest to the aftermath of the Asian tsunami, as well as social issues related photography projects such as The Brides of Krishna, the widows in Vrindavan.

He has recently published a series of photographs titled Transmission on his website which portray women prostitutes (including some hijras, or eunuchs who dress and identify themselves as female) outside of their usual environment in Mumbai, India. Kalpesh chose to photograph his subjects, not in the brothels as many photographers have done, but in his studio.

In an accompanying article in the Independent, Kalpesh says: "They were really surprised that I wanted to take their photographs in the studio and not in a brothel, but I did it because I wanted to isolate the women visually in a direct way. The photographs are for me a way of breaking away from visual clichés – and more importantly, a way of breaking away from the taboos and stigma of HIV, which in India are still very prevalent."

Viewing these dignified portraits, I'm reminded of Sebastiao Salagado's "If you take a picture of a human that does not make him noble, there is no reason to take this picture. That is my way of seeing things."

Previous post on Kalpesh Lathigra (Link)
Posted by bella at 5:21 AM