Gemma Thorpe: Footsteps in the Gobi 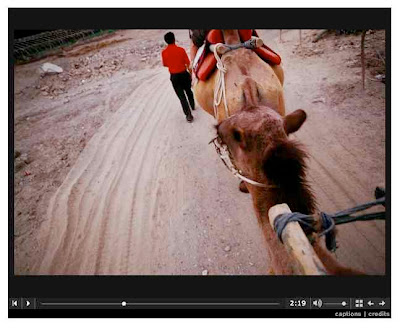 Photograph © Gemma Thorpe-All Rights Reserved
Gemma Thorpe is a British freelance documentary photographer currently based in Beijing, who specializes in social and environmental issues. Having studied Geography at Sheffield University before turning to photography full-time, Gemma initially studying at Leeds College of Art and Design and then in 2007 for an MA in International Photojournalism and Documentary Photography, completed in Dalian, NE China.

She has exhibited in the United Kingdom and in China, and has published work in the UK and Europe. Her website has a number of galleries, most of which are of China but I was drawn to two of her projects: Shamanism in Korea and Footsteps In The Gobi.

The latter is a Soundslides feature of Emma's photograph made while crossing the Gobi desert, retracing the travels of Mildred Cable who was the first Englishwoman to cross the desert. From 1923 to 1936, Mildred and two friends, sisters Francesca and Eva French, traveled back and forth across the route that has become known as the Silk Road.

The Gobi Desert is the largest desert region in Asia, and covers parts of northern and northwestern China, and of southern Mongolia. It's also the 6th largest desert in the world, and is the location of several important cities along the legendary Silk Road.
Posted by bella at 3:28 AM