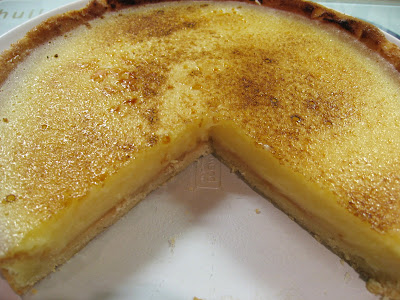 'You Challenge Gordon Ramsay' is a new series in Olive Magazine where a reader challenges Gordon Ramsay to see if their recipe against his, in a blind test by three members of the Olive Magazine reader panel, matches up to Gordon's. Of course Gordon won, but only by one point!

The lemon tart has melted dark chocolate brushed over the cooked pastry case and this is then allowed to cool before adding the lemon filling. I chose not to use the chocolate because I wasn't too sure about messing about with a classic recipe. The purpose of the chocolate, although not written about in the recipe, is I presume to keep the pastry base from going soft. Next time I make the tart though, it will definitely be with the chocolate base!

The pastry can be made in the food processor, a quick whizz and it's done. The pastry is quite sticky and I decided to roll the pastry out between two sheets of cling film to make life easier.

If you decide to have a go at making this tart try not to over cook the filling, but leave it at the wobble stage in the centre. 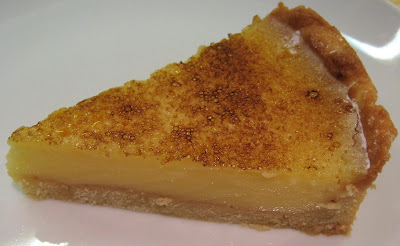 When the tart had cooled I dusted it with icing sugar and then my husband ran an industrial blowtorch over the surface to give a brulee effect! You don't think I'm going to use that thing, do you?!!! If you scan down to the end of this posting you will see him having some brulee fun.

The filling had lots of lemon flavour and not too sweet, the pastry was very similar to shortbread. I'll definitely be making this again - but not this side of Christmas!

OLIVE MAGAZINE - October 2008 Page 61 The tart serves 8 people and the recipe can be found here.