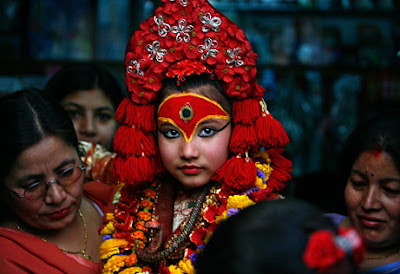 Photograph © Paula Bronstein/Getty Images
I read on the National Geographic’s website that Nepal has just chosen a new Kumari, the living goddess, a few days ago. The Kumari is essentially Nepal’s virgin goddess, whose body houses the spirit of Taleju (an incarnation of Goddess Durga).

There are stringent rules for a girl to be chosen as a Kumari. She must belong to the Shakya clan (a community of goldsmiths), her family must be extremely pious Hindus, she must have 32 characteristics of physical perfection (including a set of 40 teeth), and she has to prove her fearlessness by spending a night in a dark room with decapitated carcasses.

The chosen Kumari will be taken away from her family (it’s a huge honor), declared a living goddess, and installed in her royal chambers. She will not talk to ordinary mortals, her feet won’t touch the ground and she won’t venture out of her palace more than a handful of times a year. She loses her status with the onset of puberty, and returns to her family.

To me, taking a child away from his or her parents is cruel, but I can't judge whether the Kumari tradition constitutes child abuse or not. With many traditions that are not ours, Western sensibilities frequently over-react, and we view such practices through our own set of prisms. However, there are also a number of Nepali organizations that criticize the Kumari tradition, and I feel these are the best suited to do so and are the most qualified to establish a dialogue between traditionalists and modernists.

A National Geographic video can be seen here
Posted by bella at 3:45 AM