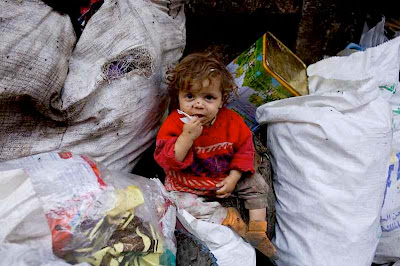 Photograph © Peter Dench-All Rights Reserved
Peter Dench is a British photographer who works primarily in the fields of commercial and editorial photography. He was granted a World Press Photo award, and his work was chosen to participate in PDN's Photo Annual 2008.

His website offers many interesting galleries (his work on UK themes is thought-provoking), but I chose his work on the Egyptian Zabaleen to bring here on the pages of TTP.

A bit of background on this unusual community (excerpted from Wikipedia):

"The Zabbaleen are an Egyptian community of mainly Coptic Christians who are self-employed in Cairo to collect and dispose of much of the city's waste. They perform this service very cheaply or for free, making a living by sorting the waste materials for reuse or recycling. Waste food is fed to livestock (most often pigs) or poultry. Other materials, such as steel, glass and plastic bottles, are sorted by hand and sold as raw materials. Other items are repaired or reused. Some material is burnt as fuel. Traditionally, donkey driven carts are used by males to collect waste from homes, which is sorted by female members of the family in zabbaleen homes. It is claimed that zabbaleen reuse or recycle 80-90% of the waste they collect. "

An estimated 60,000 - 70,000 Zabbaleen live in an area known locally as Garbage City, and are mostly descendants of poor farmers from Upper Egypt who settled in the city in the 1950s. By virtue of their being Coptic Christians and of their occupation, the zabaleen are discriminated against, and face compounded hardships brought about by the pervasive corruption and kleptocracy of Egypt's governance. Since they're not Muslims, social services provided by Islamic organizations are not extended to them as well.
Posted by bella at 5:56 AM