NYT: Tin in the Congo 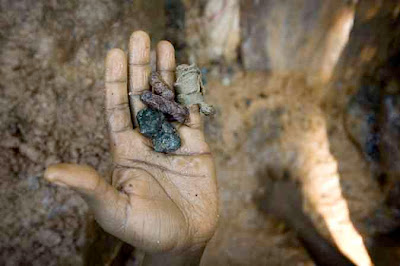 Photograph © Johan Spanner-All Rights Reserved
The New York Times features a multimedia slideshow titled A Scramble for Tin in Congo ably narrated by Lydia Polgreen and with Johan Spanner's photographs. The main scene is in Bisie, a tin-rush village of about 10,000 people who mine the tin in terrible conditions, and whose output enriches renegade Congolese army troops.

One cannot help by looking at the harrowing photographs and, most of all, by reading the accompanying article (by Polgreen) of recalling Joseph Conrad's “the vilest scramble for loot that ever disfigured the history of human conscience,” in describing what was happening in the Congo during the early 1900s, which was then considered by King Leopold II of Belgium (a monstrous criminal if there was ever one) as his personal fiefdom. Also joining the fray was Mobutu Sese Seko who looted his own country (then called Zaire) to such an extent that African kelptocracy is synonymous with his name.

(Registration may be required by the NYT)
Posted by bella at 5:10 AM