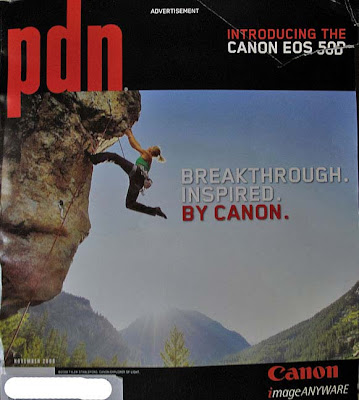 I received my PDN November issue yesterday, and was surprised to see its cover was a Canon advertisement for the EOS 50D. Now, I'm all for magazines to make money from advertisers, but to have PDN's cover taken over by an ad is annoying, and a turn-off.

To be clear, PDN still has a regular cover, but it's covered by another cover: the Canon ad, and ripping it off damages the issue.

A note to PDN people: I like PDN (not always, but most of the time) and Canon is my brand of choice, but this is not a good idea and certainly not one that I'd like to see again. I have to thumb through enough pages of ads as it stands to get to articles and features...so another ad layer is not welcome. I don't know if this gimmick is only for subscribed issues or for all issues in circulation.

This is worse than the ads that appear before multimedia presentations because I paid for the magazine and this ad doesn't go away after 15 seconds. Since I really don't want to have a Canon ad in my face whenever I reach for this PDN magazine, I tore it off.
Posted by bella at 9:36 AM