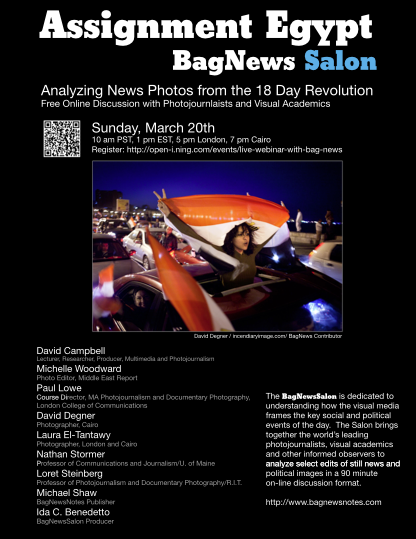 First, let me share this anecdote from the 2010 Istanbul Foundry Photojournalism Workshop. Mohammed "Mikko" Hassan, the late young Egyptian photojournalist, told me he had to borrow a lens from a friend so he could produce the kind of imagery expected of him at the workshop. Yes, young photojournalists in Egypt who work for local newspapers have to share lenses when covering assignments because they can't afford to have their own. This is not unheard of amongst non-Western photographers.

I remembered Mikko's words when I saw BagNews Salon was hosting an online panel this coming Sunday to discuss the media’s visual framing of Egypt's revolution. I expected and hoped it would involve the work of some of the young Egyptian photojournalists who are Mikko's peers, and who covered it for the local Al Masry Al Youm, Al Shorouk newspapers to name but a few.

Regretfully, this didn't seem to be the intent of the organizers.

"Instead, we looked to those with particular cross-cultural media expertise (Michelle Woodward of Middle East Report is certainly that) as well as others with deep experience reading media photos with cultural sensitivity (Campbell), as well as visual academics with an eye on on visual semiotics, in general, to articulate how the (largely Western) media created its own narrative of the story."

Perhaps a bit too heavy-handed on the defensive prose there, but fair enough. On the other hand, does it seem too "clubby" to only showcase the work of photojournalists who are already reasonably internationally well-known, and not include the photographs from those who work for Egyptian newspapers, who borrow cameras and CF cards from each other because they can't afford it otherwise, and who were beaten when they covered any anti-government demonstrations......including their revolution?

To be fair once again to Mr Shaw, he took the time to explain he didn't think the event would be the optimal venue for such photographs, but suggested that the BagNewsOriginals section might be a better fit for such work. Perhaps he's right...and it's certainly his prerogative to keep the public event within the panel's Western comfort zone.

In any case, my readers can make up their owns minds by visiting BagNews Salon and The British Journal of Photography.

Having said that, I must say I'm discomfited. Not by Mr Shaw's stance, but at having received no reaction from a couple of Egyptian photojournalists whom I asked to submit work to BagNews in time for the event. If they're unwilling to stand up and make their presence known, how can they break into "the club"?

On the plus side, I hear efforts are being made by generous photojournalists like Michael Robinson Chavez (and others) to bring the work covering the revolution by young Egyptian photographers to Visa Pour l'Image in Perpignan.

I hope they grab the opportunity.
Posted by bella at 3:00 AM