We’ve all grown familiar with the Mora Clipper over the years. Some people love it, others like me, don’t, but the incredible shortness of its tang was always a point of contention with this knife. Often it’s been given as an example of how even the smallest of tangs can make a useful knife. You can see more details about the Clipper here.

Well, it looks like Mora will be replacing the Clipper with the Companion MG knife. In all respects it appears to be the same as the Clipper, with minor changes to the finishing of the handle. 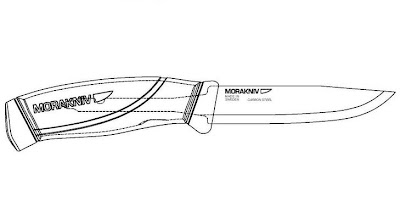 The significant change however is that it will have an extended tang. The drawing above was released by Mora, showing a tang that is significantly longer than that of the Clipper. The Mora Companion is already being sold. One location where it can be found is here. If you want a Clipper for your collection, now may be the time to get one.
Posted by bella at 4:23 AM

Email ThisBlogThis!Share to TwitterShare to FacebookShare to Pinterest
Labels: Knives