There has been some information floating around for some time now that Council Tool will be releasing a premium line of axes and there have been rumors that it will be targeted towards the bushcraft community. The new line of axes will be called Velvicut. Recently Council Tool released the below picture of a 4lb Dayton pattern axe, which will be the first to be released in the line. 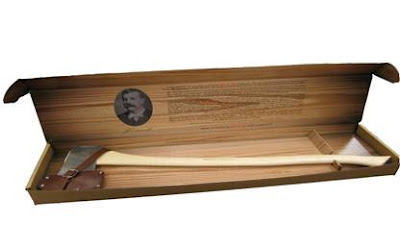 I am told that this particular axe is not aimed at the bushcraft community, and is instead going to be used to commemorate the 125th anniversary of the company. Retail price is expected to be around $170.

They are working on an axe specifically targeted at the bushcraft community, which will in effect be a redesigned Hudson Bay axe. It will be made of the higher grade 5160 steel which is featured in the 4lb Dayton axe, and will come with a hickory handle and a leather sheath. I am told that they will also eventually release a hatchet, a broad axe, and possibly a double bit cruiser axe within the Velvicut line. The release dates will depend on how significantly they are redesigned from existing models.

In the interest of disclosure, I’ve had the opportunity to test one of the 4lb Dayton pattern prototypes and to give my feedback to Council Tool. Since it is an unfinished product, I have promised not to release any specifics about it. All I’ll say is that I am very excited about the new lone of axes.
Posted by bella at 2:44 PM