Making a Replacement Handle for an Axe in the Woods

This past week, after once again watching IAWoodsman’s video on the versatility of the trailhawk, I was inspired to see what I can do with a hatchet. The part that I found particularly interesting was not the carving and splitting with the head, as that can be done just as easily with the handle still on, but the impressive speed with which he made a replacement handle.
So often when it comes to axes we obsess so much about the handle being just right, that we start to think of the ability to make a handle for a hawk from a branch as some kind of magic. I got to thinking, how hard would it be to make a hatchet handle in the woods from a branch, using just the head of the hatchet. So here it is:

I used only a hatchet head and a baton to complete the project, in addition to the branch I used as a handle. 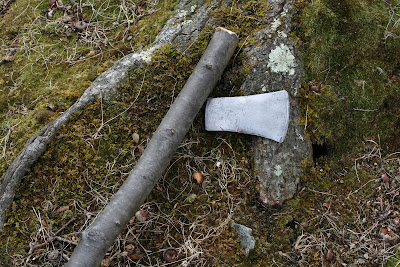 I used the hatchet head to shape one end of the branch. This took me about 8 minutes. Since you do not have to reshape the whole handle, but rather only the part that will go into the head, it is fairly easy work. Start by shaping the very top part so that it fits in the head, and then follow that shape as a guide all the way down the carved portion. 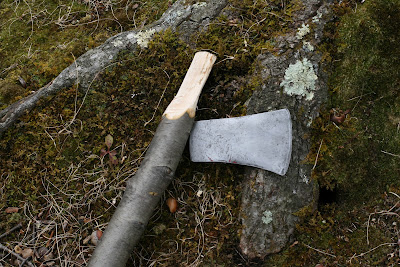 Once you know that the head fits, take the head and use it to split the shaped part of the branch. For this I did not use a baton, but just pushed the bit in. 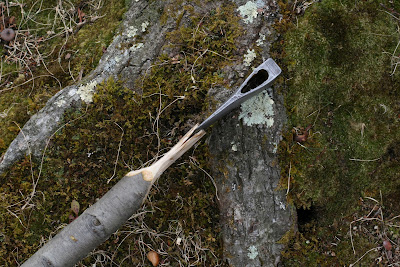 Once that is done, you have to do what I consider the hardest part-making the wedge. This is very easy to do with a knife, but when using a hatchet head, it can be cumbersome. The way I like to do it is take a longer piece and shape one end into a wedge. When that is done, I use the hatchet head and the baton to shorten it. It took me 3 minutes to make this one. 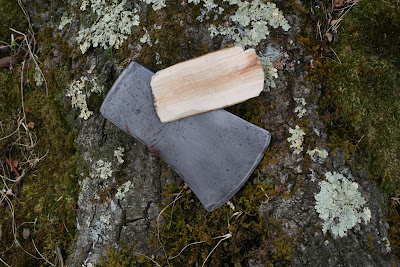 Once you have the wedge, assemble your hatchet. The longer you leave the length of the wedge, the easier it will be to remove it later if you want to take off the head. Each time you remove it, you will probably need to make a new wedge as the process of driving it in usually damages it. 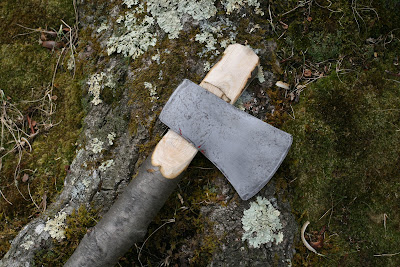 Here is the finished product. It was made in less than 15 minutes. Of course, no one would ever consider using a handle made from a branch, but if we use the same standard we do for tomahawks, the project can be completed almost as easily. You could probably make a tomahawk handle in half that time, but at some point the advantage becomes more theoretical than practical. 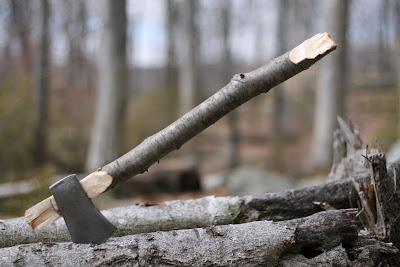 Here is what another 10 minutes with a knife gets you. It turned into a very usable hatchet, despite the low quality of the handle. 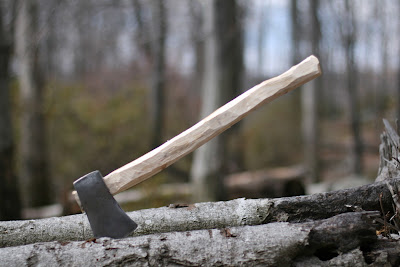 In fact, the handle was attached so securely, that once I cut off the excess part of the wedge, I had to drill it out afterwards in order to free the head. 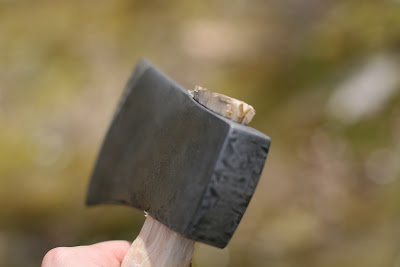 Something to keep in mind: If you find yourself in a situation where you have to remove a broken axe handle in the woods, there are two things you can try. The first is to break off the handle below the head, using a rock or any other tool that is available. Then baton it up through the eye. The second way, which works for more stubborn handles is to take a small coal from your fire, and place it in the eye of the head. Then blow on it to hollow out the eye the same way you would if you were making a spoon without a crook knife. This will burn the wood without overheating the bit of the axe. Do not put the axe head directly in the fire because that may damage the temper of the bit.

This post shouldn’t be viewed as a critique of tomahawks, or to prove that hatchets are better. Each tool has its own advantages and uses. I only write this so that we don’t slide off the edge because we saw one very skilled person do something impressive with a tool. There are no magical answers and no perfect tools. There are only skilled people and the tools with which they are familiar.
Posted by bella at 4:51 AM