My Work: In Search of Sufis In Gujarat Gallery 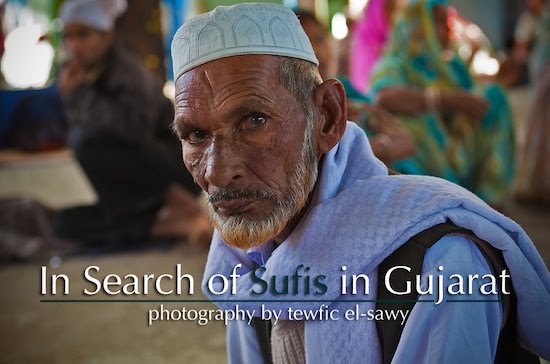 In Search of Sufis in Gujarat is a new gallery of 20 photographs made during my recently completed In Search of the Sufis of Gujarat Photo Expedition™. I think these photographs are reflective of my personal style, which is best described as "travel photography meets photojournalism". The gallery features traditional travel portraits, photojournalism-like photographs, and close-up/textures.

I've traveled to India about 20 times so far, and I've always been interested in, and drawn to, its multi-layered religious-cultural identities...which I now know is another term for its syncretism. As I write in one of the photo gallery's panels, Sufism "walked" into the sub-continent from Iran and Afghanistan, and wherever the Sufi acetic teachers lived and died, shrines were built to commemorate their teachings, deeds and legacy...and they eventually became saints, or pirs as they're called in the subcontinent. It is these shrines that were the intended destinations for my photo-expedition, and where we witnessed and photographed the manifestations of this religious fusion. I can't call these either extraordinary nor unusual, since they've been practiced here for millennia. It's just that I haven't been aware of this syncretism before visiting India.

Hinduism and Islam co-exist in India, despite what the politicians on both sides will have you believe. The fixer I hired for the photo~expedition was a living, breathing example of India's syncretism. Having converted to Islam from Hinduism, he exemplified this melding of religious traditions and practices by announcing that he firmly believed (as well as many others like him) that the Prophet Muhammad was a reincarnation of Vishnu, and that the Arabic word for Allah graphically originated from Shiva's trident. I can consider this to be lore and simplistic traditional belief as much as I want, but it's widely prevalent in the areas we traveled to.

I saw Hindus and Muslims at these shrines; Hindu women in colorful saris, and Muslims in either the traditional kurta and salwar kameez, or in shapeless black robes, as well as barefoot tribal women with gorgeous silver jewelry. Many of them supplicating the Sufi saint for favors; some reading the Qur'an and others in trances. I saw no constraints on these worshipers, based on religion, creed, race, ethnicity, caste or social status. However, no women were allowed in the chambers where the saints' tombs were. I thought I could tell the Hindu men from Muslims, but I wasn't always right. Older Muslim men usually sported beards, while Hindus didn't...however with the younger men, I was stumped unless they wore the Muslim cotton skullcap called "topee".

At the Sufi shrines, I met a woman politician with flawless English from Ajmer, a Hindu teacher from Mumbai whose daughter was afflicted with an undiagnosed mental ailment, articulate Muslim khadims (guardians of the shrine), a Portuguese-speaking elderly man who had emigrated to South Gujarat from Mozambique decades ago, and many others who were universally courteous and welcoming. At no time did I (nor any in my group) feel unwelcome or viewed with any suspicion....quite the opposite.

This is the first of many galleries I plan to feature following the photo- expedition.. Some will be of stills, while others will be in a multimedia format.

Finally, the motivational impulse behind this photo-expedition was the work by Asim Rafiqui, a US photographer and photojournalist based in Sweden, whose The Idea of India is a fascinating philosophical and visual project that documents religious and cultural pluralism as a prominent feature of Indian life.
Posted by bella at 3:00 AM