The Helle Viking is a knife that was produced as part of a fundraiser for an all around Viking longship voyage. It is supposed to be a recreation of a traditional Viking knife. The original design was created by Arne Emile Christensen of the University Museum of National Antiquities in Oslo. 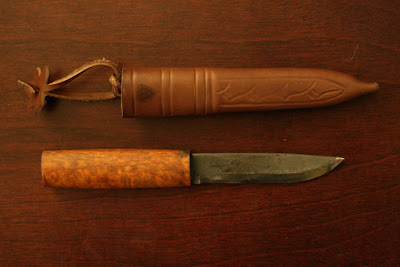 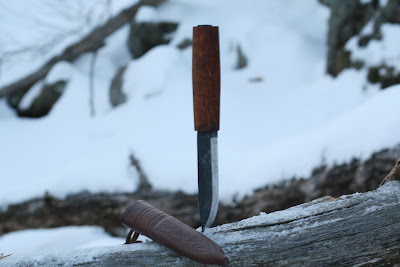 This is a medium cost knife, mostly because the price has comes down a bit in the last few months. When I originally bought it, it sold for about $100, which would put it in the expensive knives list in my book.

When compared to the Mora 1, the Helle Viking is much more robust and slightly larger. The blade is a little over four inches long. I find it to be a great length. The extra blade length comes in handy when making slicing cuts and I find it preferable to the Mora 1. The blade has a single bevel grind, and the edge is very thin and came extremely sharp. The cutting edge does not extend all the way back to the handle. There is about a quarter of an inch, which is not sharp, and in my opinion is useless. As you already probably know, I like blades that go all the way up to the handle. The spine throws sparks very well. 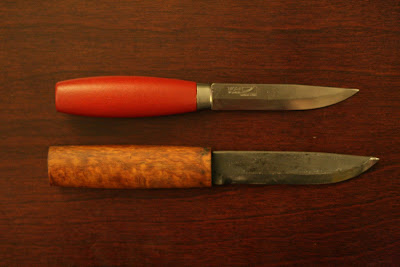 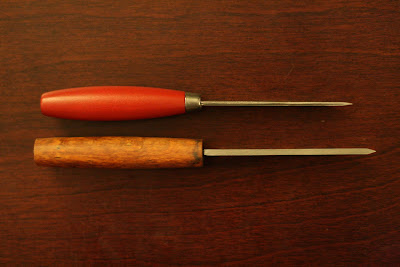 The knife has a rattail tang. The handle is made of birch, and has a teardrop shape. I find the bottom part to be a little too narrow and as a result uncomfortable. It is not too bad, but some grips don’t work well for me. The rattail tang is also very thin. All rattail tangs continuously narrow towards the end of the knife, but with this one, just like with what I’ve seen from other Helle knives, it starts very narrow as well. This makes it very vulnerable as the point where the knife faces the most stress-the handle and blade junction. 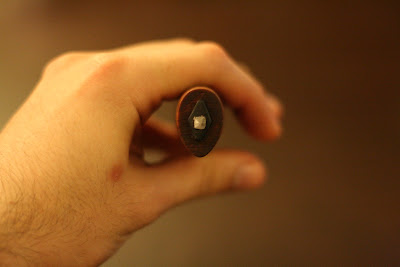 Aside from the above, I had two big problems with the knife. The first was that the handle does not have any bolsters. I understand that it is in part a historical recreation, but without the metal bolster on the front of the handle the wood is very prone to splitting. The quality of the wood is high, so it will hold out to most uses, but eventually you risk splitting it.

The second large problem I had with the knife is that the edge was not evenly ground. It wasn’t a minor error either. The blade almost resembled a chisel grind. This type of lack of quality control is appalling for a $10 knife, let alone a $100 knife. I had to spend a number of hours with a grinding stone to put a presentable edge on it. I have no idea how it got off the production line.

After I had fixed the edge, I took the knife out for some minor testing.

The knife had no problem splitting a three-inch log. The blade is thicker than that of the Mora 1 and you can feel that when using the knife. 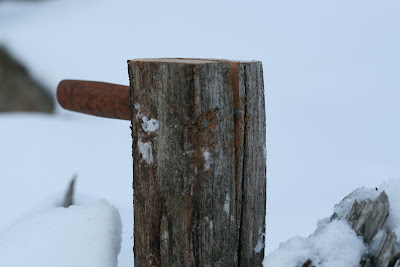 Truncating with the knife is also fine. Even though the wood I was using was frozen, there was no damage to the blade, and the handle held out fine. 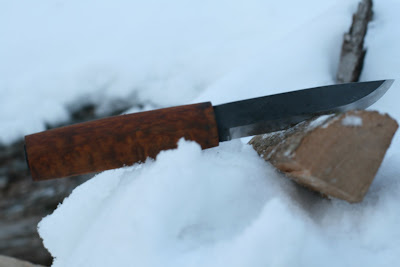 The Helle Viking also did well with feather sticks. I had spent so much time sharpening this knife because of the imperfections that you could split a hair with it. The thicker blade however, makes it slightely worse at carving tasks than the Mora 1. 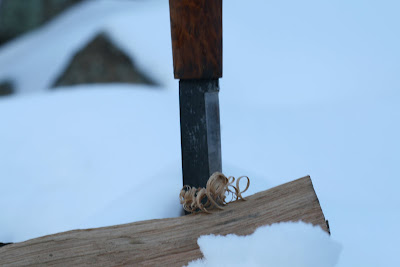 The knife comes with a leather sheath. It is not great quality. In my opinion the leather is too thick for this type of sheath, and the design leaves too much of the handle exposed. More than half of it sticks out of the sheath, which worries me.

Overall, this knife is a big fail in my book. The proportions are good, but there are certain design issues that bother me. The lack of a bolster and the narrow tang bother me quite a bit. I would have also preferred a sharpened blade that went all the way back to the handle. I can’t complain too much about the design however because at the end of the day, it is supposed to be a recreation of a traditional Viking knife, so there are certain historical limitations which must be kept in mind. The lack of quality control however is inexcusable. This is not a low cost knife by any means, and allowing a blade that has been so poorly sharpened and misaligned to get off the line is hard to explain.
Posted by bella at 7:27 PM