As you guys know, my girlfriend and I have two dogs of our own. We have a four year old pug-mix named Maximus and a one year old spaniel-mix named Rhea.
Unfortunately, there are way too many dogs out there without homes, and many end up getting put to sleep in overcrowded shelters. For that reason (and because I think you can never have too many dogs), we’ve started to take foster dogs in our home.
We got our first foster dog this week. His name is Merlin. We are not sure how old he is, but he’s probably around six. 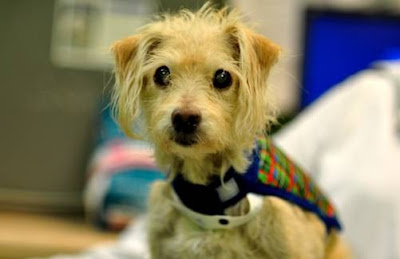 He is in pretty bad shape. He is the same size as Maximus, but at half the weight. He is nothing but skin and bones. On top of that, he is diabetic, which requires twice daily shots of insulin. Because of the diabetes, his vision is also not that great.
Even with all that however, he is the sweetest dog. He loves people, and gets along great with Maximus and Rhea. I know this is not a typical subject on which I post, but I figured I would share. You can better keep up with our dogs at a blog that my girlfriend started: Foster Fluffies.
Posted by bella at 5:32 AM