Recently I’ve started looking at some alternative fire striker designs. The first one that came to mind was the Aurora fire starter by Solo Scientific, which I had seen reviewed a long time ago. 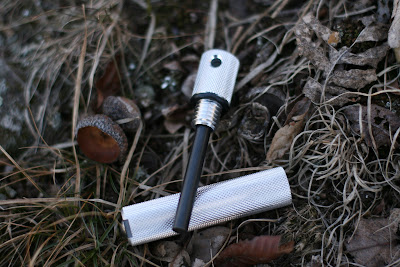 The Aurora fire starter is a very interesting design. The unit is contained in a small aluminum cylinder. When you unscrew it, you can pull out the actual spark producing rod. The striker is contained on the other part of the cylinder. There are two models available. The original model is the 440C one. It is named that because the striker is made of 440C steel. The newer model, and the one I tested here is the 2SA model has a cobalt striker. The change was made because people found the 440C striker to get dull too quickly. Here you can see the Aurora fire starter next to a Light my Fire firesteel, scout model. 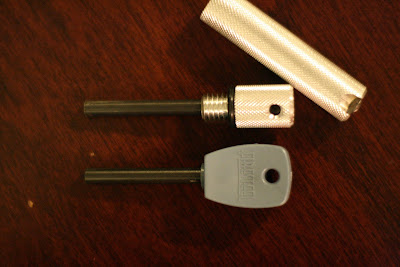 The actual rod element is a ferrocerium rod, which contains magnesium. As a result, the sparks that are produced, last considerably longer than those produced by a regular ferrocerium rod. The downside however is that the added magnesium makes the rod very hard, and difficult to strike. If you use the back of your knife, there is a chance that the spine will be damaged. That is why it comes with the built in striker.

I had high hopes for this unit, but was unable to get it to work properly. I just found it too hard to make good sparks. To actually produce sparks, I had to apply a large amount of force and use a quick, flicking motion of the wrist. The process was much harder than with a standard ferrocerium rod. I found it nearly impossible to make sparks in a controlled manner, which would not disturb the tinder. The other issue I had with the design of the fire starter was that the functional element is much smaller than the unit as a whole. The overall size is about that of an army model Light my Fire firesteel, but the actual rod is a similar size to the smaller scout model that you see above. It is a beautiful design, and great in theory, but I just couldn’t get it to work well. Maybe the inability to use it was simply my failure, and I have seen other people get good results, but I’ve never had a problem using a regular ferrocerium rod.
Posted by bella at 5:02 AM