As you know, Council Tool will be releasing a new line of axes called Velvicut. They intend for some of the models within that line to be aimed directly at the bushcraft community, and it appears that down the line there is Hudson Bay axe and a double bit cruiser axe in the works. The first one to be released in the line however is the 4lb Dayton axe, designed to commemorate the 125th anniversary of the company. I was given the opportunity to test and give feedback on a prototype of this axe, and I want to give you guys a look here as well. Of course there will be changes in the final product, and I’ll try to specify what I’m told those changes will be. 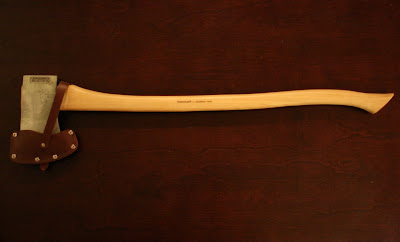 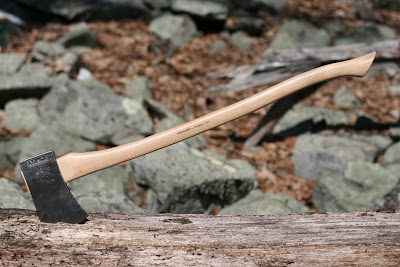 The Velvicut axes will not be cheap. This one certainly isn’t. It is intended to be a top of the line production axe, and to go head to head with Gransfors Bruks. In that respect, the price is reasonable (a comparable Gransfors Bruks American Felling Axe sells for about $200.00). To compete at that price level however, the axe has to meet some very high standards.

Here I will compare the Council Tool Velvicut 4lb Dayton Axe to the Gransfors Bruks American Felling Axe. You can see the two of them here. 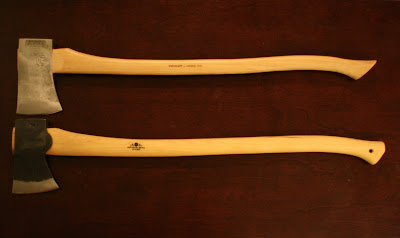 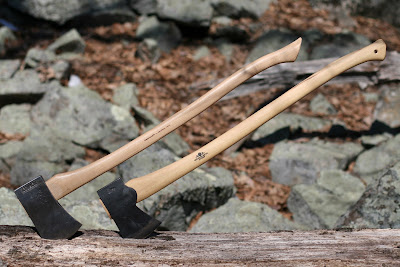 The handle of the Velvicut axe is hickory, and has the familiar Council Tool design. I found it to be very comfortable, as I generally tend to like their handle designs. The grain alignment on this one was not good, certainly not top of the line good. I was assured by Council Tool that they had a problem with this particular batch of handles, and that the handles used on the final product would be of much higher grade.

The head of the Velvicut axe is attached to the handle using a method identical to that used by Gransfors Bruks, utilizing a wooden wedge and a metal pin. The attachment was very secure. 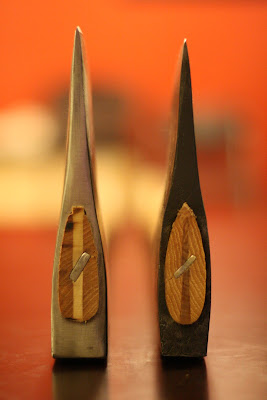 The design of the head is beautiful. It reminds me of a vintage Kelly Flint Edge head. All the lines are clean, proportional and well aligned. The overall shape is exactly what I like to see in an axe (I am partial to the Dayton pattern). The cheeks are thin and transition smoothly into the eye. They also have a feature which is common on vintage axes, but is rare to see today-the cheeks are tapered towards the top and bottom of the head. This is a design feature used to minimize binding of the head. The smooth and continuous lines of the head, combined with the tapering of the cheeks, makes this axe great for both chopping and splitting. The head is made of high grade 5160 steel, and as with the other Council Tool axes it is differentially tempered. It will also be tempered harder than the regular line, coming in at about 52-56 HRC.

I found the edge of the axe to be thicker than I like. It wasn’t too thick, but was not as thin as that of the Gransfors Bruks American Felling Axe. Council Tool assures me that on the final product the edge will be significantly thinned out. As it came, it was sharp and very durable, but on a high performance axe, I like to see a thinner edge.

The balance of the Council Tool Velvicut 4lb Dayton axe is good. It is not perfect, as you see the bit hanging somewhat low when the axe is balanced. The balance seems comparable to that of the Gransfors Bruks American Felling Axe. 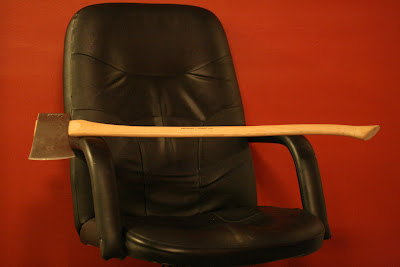 The axe comes with a leather sheath. I am told they are still finishing up the design, so there isn’t much I can say about what the final product will be.

Overall, I have high hopes for the final product. Obviously this was never intended to be an axe that you carry in you pack, but if the design and quality characteristics of the final product are up to par, I would be very excited to see some of the other models that will be released in the line. What you see above is just the prototype, so we still have to wait and see what the final product looks like. This particular axe should be released sometime in April.
Posted by bella at 5:35 AM