Well, I thought winter was at an end, and officially, we are now few days into spring, but we just got a fresh round of snow, which prompted this post.
In many areas, snow is a reality of winter camping. It is something that has to be accounted for and managed during an outing. Setting up camp directly over several feet of snow is not advisable, and is right down impossible if you will be heating the area with a fire. Life can be made much, much easier by a good snow shovel. Of course, a standard snow shovel would not be a realistic thing to carry on your back for any significant distance. With some looking around however, alternatives can be found. 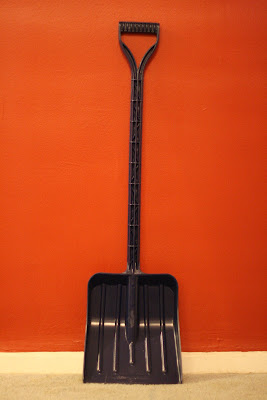 The shovel you see here is the Garant Kid’s Shovel. I am yet to be able to find a Garant axe in the US, but their shovels seem to be everywhere. I bought this one for $13.00 at a local hardware store. The shovel is 33.75 inches long and weighs 1.9lb. 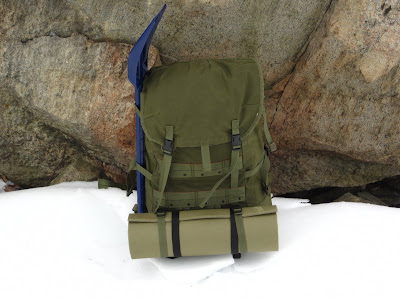 The shovel is well constructed. The plastic is of good quality, the handle has cutouts, which reduces weight, and most importantly, the shovel is a size which can be realistically carried while backpacking. Even though this is a relatively small show shovel, and I would not want to shovel out a driveway with it, it makes camping in the snow significantly more pleasant. The additional weight is something to consider. There are probably lighter snow shovels out there, but I am yet to find a method of clearing out a camp site in the snow that even comes close to comparing with using a small shovel such as this one.
Posted by bella at 4:56 AM

Email ThisBlogThis!Share to TwitterShare to FacebookShare to Pinterest
Labels: Educational, Other Reviews