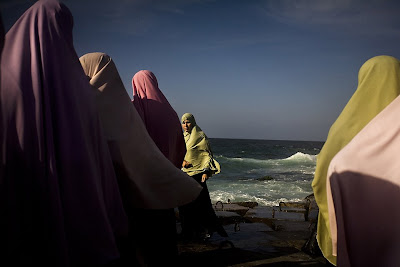 ©Dominic Nahr-All Rights Reserved
The WSJ's Photo Journal has featured some 21 photographs by Dominic Nahr in an interesting photo essay titled In Egypt, Muslim Brotherhood Plays Defence and starts it off with this:

Egypt’s Muslim Brotherhood is on the defensive, its struggles reverberating throughout Islamist movements that the secretive organization has spawned world-wide.

I'm somewhat puzzled by this statement, because as far as I know the Muslim Botherhood is a recognized political party in the country and from what I sensed during my just ended short visit to Cairo, it seems to be well entrenched in Egypt's social fabric. The Islamic movement fills voids left by a government overwhelmed by the explosive growth of its population, and by state organizations paralyzed by inefficiency and rotten by corruption. Truth be said, the Egyptian people deserve a better quality of life, and religion plays an important role in making their lives a little more bearable.

Irrespective of politics, I was amazed to see that all women employees in government entities wore the Islamic veil. Some of them even wore the "niqab" which covers the whole face. I had to spend some time at a couple of these government offices, and seeing this relatively recent change in women dress habits was shocking. I haven't been to Cairo for 8 years, and this was the most jarring change.

I'm told that many of the women dress so conservatively do so to avoid criticism and sexual harassment at their workplace. I'm also told by a local wit that some are "Saudi Arabian from the outside and French from the inside", meaning that it's all a show rather than based on conviction. It may well be true, since I noticed that the veiled young woman vendor selling me a SIM card for my cell phone was heavily made-up, with traces of glitter on her eye-lids.

Having said that, I can only reiterate what I wrote in an earlier post. There are no kinder people than Egyptians, and their courtesy and genuine warmth towards foreigners and visitors are wonderful attributes.
Posted by bella at 8:21 AM