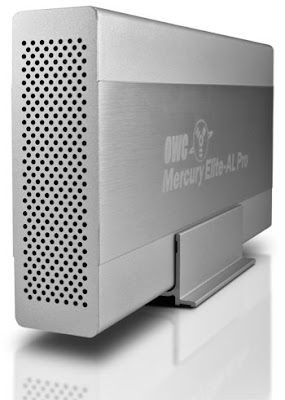 Having had the misfortune of frying two of my external hard drives a few weeks ago, I decided to take the example of TheLightroomLab, and get two OWC Mercury Elite-AL Pro 'Quad Interface' FireWire 800/400 + USB2 2.0 + eSATA of 1TB each, and restructure my backup storage system.

Yes, I'm eschewing all advice for a RAID system, DOBRO, and Time Capsule by buying these two behemoths, and doing my backups manually, and mirroring one with the other giving me two identical RAW vaults. The hard drives come with software called Data Backup 3 which is a utility to backup, restore and synchronize data with minimal effort. We'll see how it performs. These two OWC drives will be used for RAW only. The TIFFS, multimedia and all the rest of the stuff will remain spread between 3 Lacie drives.

Call me a dinosaur if you like, but that's my favored system. Copying almost 25% of my library of RAW images from DVDs onto a OWC hard drive is enough to drive one crazy, but I'm lucky that I religiously archived my images on DVDs.
Posted by bella at 8:41 AM