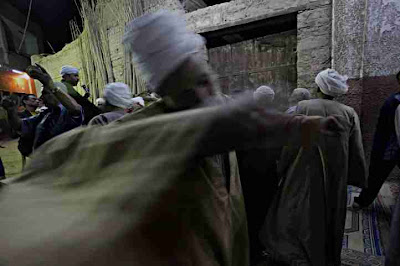 ©Tewfic El-Sawy-All Rights Reserved
It happened. Driven by Abdel Fattah ("Kojak") and accompanied by Badawi, then meeting with Haj Zakaria and Badawi's father at 11:00 pm, I was welcomed to an authentic zikr ceremony held at the village of Manawat. This is certainly not a venue for the faint-hearted or for foreigners (assuming they would even find the village). The ceremony starts after the night prayer and goes well into the dawn hours. I would go beyond describing the performance as totally authentic. It's a rural ceremony performed by villagers for villagers who follow a certain tariqah or Sufi way. The performance was held in a small alley, lit by a combination of fluorescent and dangling bulbs. The attendees, men and women, sat on straw carpets, and lined the walls of the alley smoking sheeshas or cigarettes.

As I wrote earlier, zikr is a devotional performance which includes the repetition of the names of Allah, supplications and sections of the Qur'an.

The music and chanting were mind-blowing. Very similar to the traditional rural songs called mawwal, the rhythm starts slow and progressively gets quicker while the attendees sway to its tempo, until they reach a state of trance. Not the easiest of photo shoots because of the confined space, mixed light sources and blaring loudspeakers, but I was transfixed by the authenticity of the event. Unfortunately, the monochrome of Egyptian traditional dress (browns, white and black) is not visually magnetic...but that's how it is.

Once I'm back in New York, I'll edit my photographs and review the quality of the audio recordings and determine whether a multimedia slideshow can be produced. In the meantime, here's one that caught my eye from last night.
Posted by bella at 11:39 PM