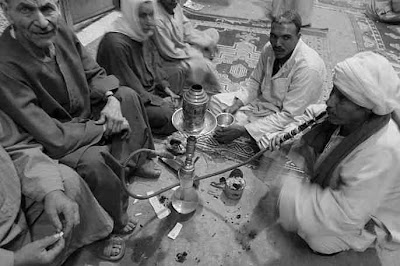 ©Tewfic El-Sawy-All Rights Reserved
I'm frequently asked to organize and lead photo~expeditions to Egypt (or more specifically to Cairo), and I've always resisted the temptation. People view this as strange and have difficulty understanding the reasons. After all, I was born in Cairo, I speak the language (almost a colloquially as its residents) and perfectly understand the culture.

My reasons for my resistance are many, but here's a few I can share on this blog.

1. I'm a travel-documentary photographer, and my primary interests for my photo expeditions revolve around photographing esoteric but authentic cultural and religious rituals and ceremonies. My trips are "event-specific" such as my recent photo~expedition to Kerala for the Theyyam rituals or my forthcoming trip to Morocco to photograph the Gnawa festival. These are highly colorful events, with powerful visual aesthetics. The visual aesthetics of authentic festivals in Egypt are not as colorful nor as "eye-candy" appealing. I don't mean to imply that these are not interesting; quite the opposite is true but they're usually monochromatic and much less flamboyant than in Asia as an example. Somewhat facetiously (and perhaps a bit unfairly) I described Cairo as being beige on beige on beige with hints of beige.

The ceremonies or rituals aimed at the touristic market in Egypt are contrived, and while these are designed to be colorful and attractive, I find their lack of authenticity to be unappealing. Yes, there are a few authentic and visually interesting religious festivals in Egypt but here's where my second point kicks in.

2. Egyptian bureaucracy (which is stifling and pervasive here) is an enormous turn-off for me. I'll be charitable and just say that fixers need fixers in Egypt to be able to fix anything. Nothing gets done in a timely fashion or efficiently unless one lubricates the system. Tipping is no longer an act of appreciation for good service, but is now an entitlement. Bait and switch in the tourist industry is frequently the norm, whether in terms of guides, transport or itineraries.

The success of my photo~expeditions is because I'm confident of the supporting infrastructure I've chosen to use...whether guides, fixers, agents, vehicular transport, hotels and so forth. In Egypt, unless I were able to use the people who are close to me (but they're not in the tourism industry) to set up my trips, I have no confidence that they would go as well as I would want and expect them to be. It's difficult to find kinder people than the Egyptians, but that characteristic is not sufficient to overlook the host of downsides.

I wish I could say otherwise, but Egypt will not appear as a destination for my photo expeditions.
Posted by bella at 10:57 PM