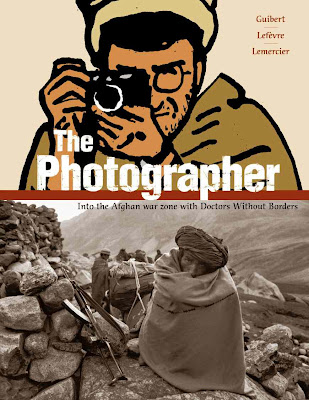 From what I've seen online, The Photographer is an innovative book combining the photographs of the late Didier Lefèvre, and the drawings of Emmanuel Guibert, and tells the story of a small group of mostly French doctors and nurses who traveled into northern Afghanistan by horse and donkey in 1986, at the height of the Soviet occupation.

The fact that a woman, Dr. Juliette Fournot, led the medical mission whilst dressed as a man and managed to command the respect of the French and Afghans (including the war-hardened warlords and local chiefs, is not only a testament to her character, but shatters our stereotyping of Afghan culture and its Islamic orthodoxy.

Chris Hedges reviews the book in The New York Times, and he writes this insightful paragraph at its end:

The power of “The Photographer” is that it bridges this silence. There is no fighting in this book. No great warriors are exalted. The story is about those who live on the fringes of war and care for its human detritus. By the end of the book the image or picture of a weapon is distasteful. And if you can achieve this, you have gone a long way to imparting the truth about warfare.
For more info on Juliette Fournot, MSF has this page, and on Didier Lefèvre here.
Posted by bella at 2:52 AM