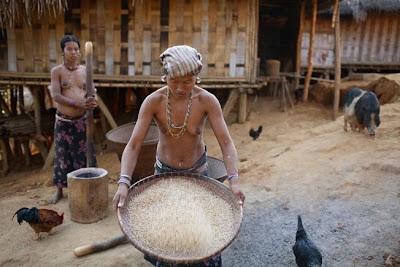 ©G.M.B Akash-All Rights Reserved
G.M.B Akash’s is one of the "young Turks" in photojournalism, and has made his imprint in the international photography scene. He's the first Bangladeshi to be selected for the World Press Photo Joop Swart Masterclass in the Netherlands, and received numerous international and national awards. His work has been featured in over 45 major international publications including: Time, Sunday Times, Newsweek, Geo, Stern, Der Spiegel, The Guardian, Marie Claire, The Economist, The New Internationalist, Kontinente, Amnesty Journal, Courier International, PDN, Die Zeit, Days Japan,and Sunday Telegraph of London.

In 2006 he was awarded a World Press Photo award and released his first book “First Light”. He was also recognized as one of 30 Emerging Photographers (PDN 30) by Photo District News Magazine in 2007.

I chose his gallery Tribal life in Bangladesh, whose introduction informs us that these tribes live primarily in the Chittagong Hills and in the regions of Mymensingh, Sylhet, and Rajshahi. Reading further, I came across this sentence; a situation that is really replicated across many countries of the world, not only among tribals.

"The women-folk are more hardworking than the males and they are the main productive force."

Posted by TTP's robotic assistant
Posted by bella at 5:16 AM