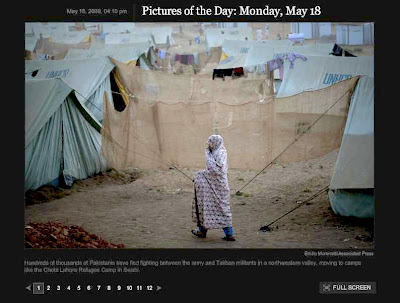 The New York Times just launched a large-format photo blog called LENS to showcase photojournalism projects. It joins the handful of newspaper blogs that feature photo projects that might not be able to find a home in print, following the model established by the very popular The Big Picture (Boston Globe) and WSJ's Photo Journal.

PDN reports that LENS has no dedicated staff and no budget for photography, and will showcase work shot for the Times’ print edition, personal projects by Times photographers, wire service photographs, and work provided for publication at no cost. I'm not thrilled to read the latter option, but it's a sign of the times (pun intended). The blog will also feature multimedia features...and I'm always happy about that. It will provide inspiration, but may occasionally also provide fodder for my rants, aka opinionated criticism such as overuse of panning, bland narrative, mis-matched audio soundtrack, itty-bitty photographs, etc.

I've quickly visited LENS, and it's interface is quite neat. It'll be bookmarked and referred to often on this blog. The Washington Post will probably follow soon, as its Camera Works needs a major facelift.

My thanks to Ralph Childs who alerted me that LENS was launched as I landed in London!!!
Posted by bella at 11:31 PM