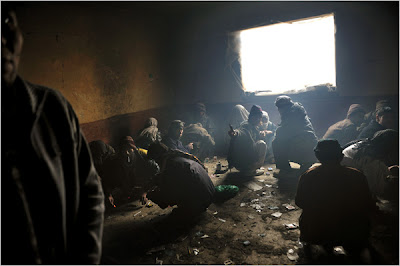 ©Lynsey Addario/NY Times-All Rights Reserved
"Afghanistan, the world’s largest producer of opium, is drowning in a sea of its own making. While the country’s narco-traffickers ship vast quantities of the stuff to Europe and the United States, enough of it stays behind to offer a cheap and easy temptation to the people at home."The New York Times featured a photo essay by Lynsey Addario titled Drowning In Opium and an article by Dexter Filkins re-affirming the necessity for a new playbook on the issue of Afghanistan. The article tells us that Afghanistan produces more than 90% of the world’s opium, and that the money earned from narcotics accounts for more than half of the country’s gross domestic product, and that it also funds the Taliban insurgency.

Seeing the Afghan President in the news visiting the White House these days makes me wonder as to the degree of pressure put on him by the Obama Administration. Karzai's governance's corruption is pervasive, and the Afghans gravitate toward the Taliban as a reaction to the misrule.

I read in the British newspapers that Vice President Biden walked out of a meeting with Karzai last year, which might be a prequel to what may be the current attitude at the White House. We must realize that Afghanistan is a failed state, and is not salvageable through military interference. I'm sure there are various scenarios being examined by policy makers, and hopefully some will be workable.


posted live from Cairo
Posted by bella at 1:20 AM