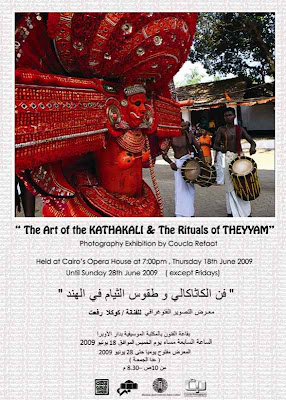 As I hinted earlier, another participant in my Theyyam of Malabar photo~expedition is about to step into the limelight. Alia "Coucla" Refaat is putting the final touches to an exhibit of her photographs of Theyyam ceremonies and Kathakali performances, and has issued the following press release:

“The Art of Kathakali & The Rituals of Theyyam,” an exhibition by Alia (Coucla) Refaat, an award winning and internationally recognized and exhibited commercial and travel/documentary photographer will be open to the public Thursday 18th June 2009 through Sunday 28th June 2009 at The Cairo Opera House, Music Library. The exhibition along with a reception will be held Thursday 18th June 2009 at 7:00pm inaugurated by his Excellency the Indian Ambassador Mr. R. Swaminathan, along with Indian Embassy staff.

The exhibit highlights two religious rituals and performances from the Kerala area of South India: Kathakali and Theyyam.

An extremely talented photographer from Egypt, Alia studied commercial, studio and portrait photography at the Speos photographic institute in Paris.
Posted by bella at 5:30 AM