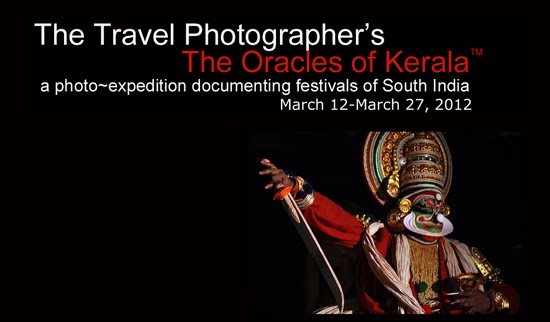 Since announcing it via my newsletter a few days ago, I've received an unusually large number of applications to join The Oracles of Kerala Photo Expedition/Workshop™, scheduled for March 2012, and which will revolve around producing photo essays and multimedia stories of two of Kerala's most unusual religious and ancient festivals, as well as its ancient dance-drama and Vedic chanting tradition.

The workshop is limited to 7 participants, and having received a larger number of applicants than expected meant I had to base my choice on a combination of factors; preference was given to photographers who have joined my earlier photo~workshops aka the "repeaters", then to those applicants who had been wait-listed on one or more of my earlier photo workshops, and lastly on the style of their photography and interest in learning multimedia.
I regret turning away anyone.

It would be certainly be easier for me to enlarge the number of participants on my trips, and accept as many applicants as possible, but I'm not that kind of travel photography expedition leader.
Posted by bella at 3:01 AM