Differentiation Between Axes and Tomahawks

Recently I posted a comment on a forum, where a person was asking for an explanation on the difference between hatchets and tomahawks. The following is a modified version of what I wrote there. I figured I would post it here as well. Keep in mind that I am not an expert on the subject, and this is just what I have been able to piece together from my own research. 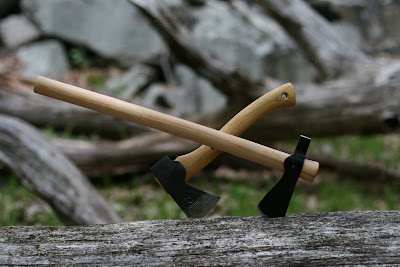 When trying to differentiate a tomahawk from an axe or a hatchet, there are two things to consider. One is the historical evolution and distinction between the tools, and the second is the modern definition of the two.

In general terms, from a historical standpoint, a tomahawk is any small axe from the early American colonial period. Most were used for trade with Native American tribes, but were also used by explorers and outdoorsmen. The term tomahawk appears to be an Algonquian word for hatchet. In fact, in this early period, the two terms were interchangeable, and referred to the same object.

From a design and functional standpoint, a basic tomahawk from this early period is not distinguishable in form from an axe. The reason for that is that tomahawks were literally shrunken versions of then existing European model axes. Prior to the innovations in axe design which occurred in America in the 1800s, axes were simply constructed, with a round eye, and virtually no poll. You can see a good example of how early axes were made, and their design elements here. A tomahawk was a lighter version of that design, produced at very low cost and largely used for trading.

Very quickly, these small axes or tomahawks found a place as a combat tool, and different designs emerged to aid in that role. The most obvious is the pike hawk, which has a blade on one side and a spike on the other. Because of this role, the main distinction from a historical stand point, between axes and tomahawks comes down to how the tool was used. It is generally accepted by collectors that a tomahawk is a trade axe which was used for fighting. Certainly a tomahawk would find itself put to use doing camp chores on a cold night, and similarly a belt axe would split an enemy’s skull as easily as it would split wood, but for collectors, how the tool was used can make a big difference. From a design standpoint however, a basic tomahawk is indistinguishable from an axe of similar size from the early period.

Over time, the hawk lost its role in warfare, and significant changes occurred to axes, such as the use of a heavy poll to counterbalance the bit, and a narrower, almost triangular eye. Eventually, the modern axe and modern hatchet emerged. For the evolution of the axe head design, see here.

These days there are numerous axe and tomahawk designs. There is great overlap between the two tools, and many of the designs have lost any historical connection. We often assume that what we see called a tomahawk today is the same as a tomahawk of the 1600s, but that is not necessarily the case. There are many things we attribute to tomahawks these days that would not have been that commonplace in early colonial America. That being said, three elements have come to be considered definitive when distinguishing a current production tomahawk from an axe, at least in bushcraft circles.

The first element is that tomahawks have a more or less round eye, unlike an axe, which has a narrow and almost triangular eye. This design characteristic is a remnant of early axe designs and has remained in use primarily because it is easier to put a handle in a round eye than a narrow eye. For that reason, many of the axe designs produced even recently by companies like Collins for export to South American and Asia have had a round eye. That way a purchaser who does not have access to commercially made handles can just take a branch, shape it a bit, and fit it as a handle.

The third element is that a tomahawk has a longer handle in proportion to its head weight than a hatchet. Many people see a tomahawk as a tool with a light head (½ lb) with a fairly long handle (about 20 inches). This apparent characteristic just like the hafting method is a fairly new “definitive” aspect of tomahawks. Historically, tomahawks have come in many different lengths. The well known pipe hawks had fairly long handles, but many other designs used what we would today consider hatchet handles. In his book Camping and Woodcraft, Kephart states that his hawk had a 12 inch handle. Also, many hawks were carried tucked into the user’s belt, limiting the size of the handle.

So, this is just some brief background on tomahawks. This should provide some framework, so you know what I am calling tomahawk as opposed to an axe or hatchet. I think that in our modern definition of “tomahawk” we have exaggerated certain aspects of what was historically considered a tomahawk, and we have downplayed others. The hafting method has taken center stage, while things like the inclusion of a poll have become commonplace. This can create a significant amount of confusion when people talk about tomahawks and axes, because we end up mixing history as well as terminology.
Posted by bella at 4:50 AM