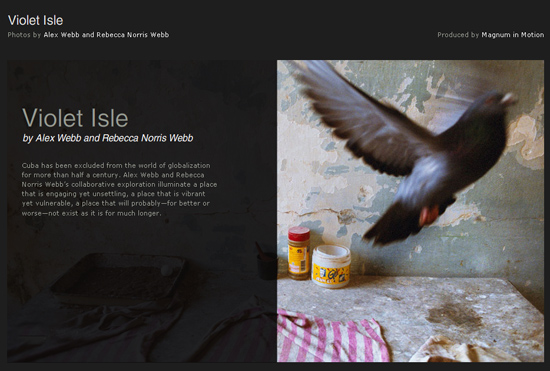 He began working as a professional photojournalist in 1974, and joined Magnum Photos as an associate member in 1976, and a full member in 1979. He photographed extensively in the United States, the Caribbean, Latin America, Africa, and in Turkey. His photographs have appeared in such publications as The New York Times Magazine, Life, Geo, Stern, and National Geographic, and has published many books.

Rebecca Norris-Webb is an international photographer and poet.

Violet Isle is featured by Magnum In Motion, and showcases Alex’s exploration of the streets of Cuba and Rebecca’s discovery of unique and sometimes mysterious animals. While the photography styles of this husband-wife team is distinctly different, they decided decided to weave their images together to create a multi-layered portrait Cuba.

While you watch the audio slideshow, you'll see this combination of the two styles...the typical street scenes, color saturated with lots of shadows, reflections, sun-drenched walls...and more ethereally, many caged birds, a metaphor for Cubans. The soulful soundtrack is Silencio by the Buena Vista Social Club.

Would I have preferred to hear a soundtrack of ambient audio and music recorded in the streets of Havana instead? Yes, of course...no question about it. That being said, anything by the Buena Vista Social Club is great.
Posted by bella at 2:59 AM