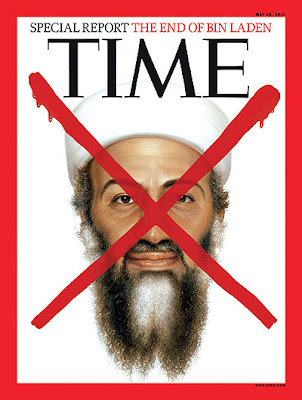 Here are some quotes off commentary that I thought were right on the mark:

Jon Stewart (The Daily Show): "The face of the Arab world in America's eyes for too long has been bin Laden, and now it is not. Now the face is only the young people in Egypt and Tunisia and all the Middle Eastern countries around the world where freedom rises up."

Robert Fisk (The Independent): "So now for a reality check. The world is not safer for Bin Laden's killing. It is safer because of the winds of freedom blowing through the Middle East. If the West treats the people of this region with justice rather than military firepower, then al-Qa'ida becomes even more irrelevant than it has been since the Arab revolutions."

Robert Fisk (The Independent): "But these past few months, millions of Arab Muslims rose up and were prepared for their own martyrdom – not for Islam but for freedom and liberty and democracy. Bin Laden didn't get rid of the tyrants. The people did. And they didn't want a caliph."
Posted by bella at 3:00 AM