This is another folding saw that is similar in size to the popular Bahco Laplander. In the interest of providing more options, I figured I would review it and see how it compares. 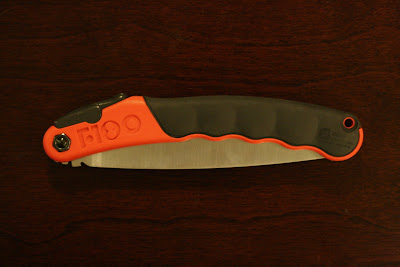 Here you can see the Silky F180 next to the Bahco Laplander. 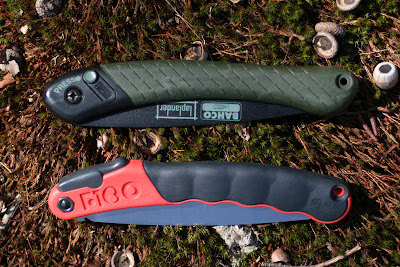 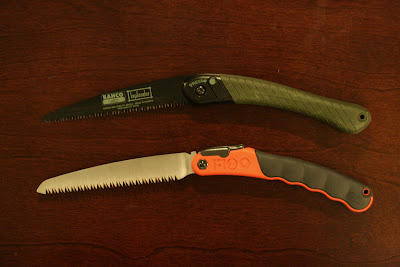 In size and weight the two saws are virtually identical. They also both perform very well for the size. I was not able to tell any difference in the speed of cutting between the two. The silky F180 has larger teeth than the Bahco Laplander, and I’m sure that would make a difference in certain types of wood, but in the cutting I did with it, it was not noticeable. The Silky also has a smaller cutting surface. While on the Laplander the teeth extend all the way back to the handle, on the Silky they stop about 3/4 of an inch before the handle.

There are a few differences between the two saws, mostly in the locking mechanism. While the Bahco Laplander has only an open and a closed position, the Silky F180 has two open configurations. The second configurations allows you to open the saw even further, as you can see from the picture. I am not sure what advantage that offers, but options are always a good thing. 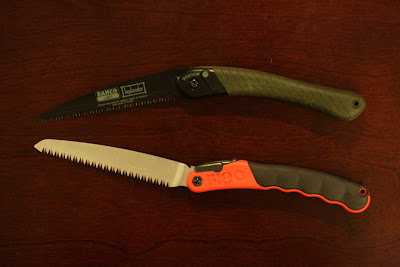 Unlike the Bahco Laplander however, the Silky F180 does not lock closed. I did not have the saw open in my pack, but I would have certainly preferred it if it locked when closed. Another problem with the Silky F180 that I found very irritating was the placement of the closing mechanism. On the Bahco Laplander the button that releases the locking mechanism and allows the saw to close is on the side of the handle. On the Silky F180 it is located on top, and is a rather prominent, large button. This prevents the holding of the saw close to the blade. If you hold the handle in that location, which I like to do, you unavoidably end up pressing the release button.

I also found the blade of the Silky F180 to have a bit more movement than the Bahco Laplander. While the wiggle was small, and did not effect the performance, when we are talking about two good saws, the small things make the difference.

Overall, I prefer the Bahco Laplander. The performance wasn’t all that different, but a few small things made the difference for me. The most important was probably the location of the release button for the locking mechanism.
Posted by bella at 5:08 AM