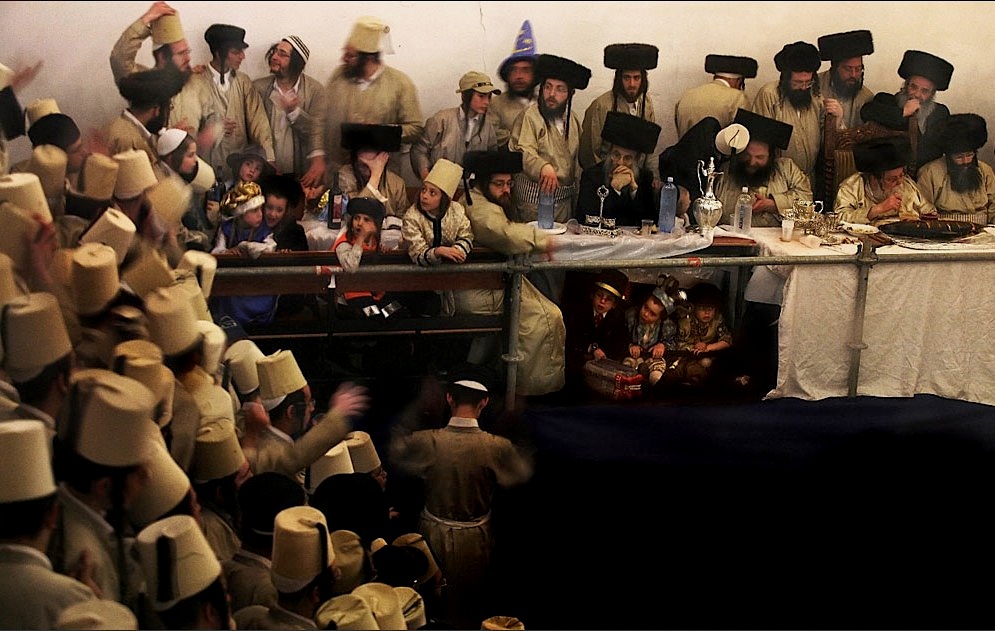 Photo © Rina Castelnuovo-All Rights Reserved
The New York Times' Lens blog features the work of Rina Castelnuovo in Palestine & Israel. Essentially a "smooch" job by the writer, but there's no denying that she deserves every word of it.

After all, she's the photographer who captured the infamous photograph of the thuggish Israeli settler tossing wine at a Palestinian woman on Shuhada Street in Hebron.

Amongst Ms Castelnuovo's photographs on the Lens blog, I chose the one above as my favorite. The photograph is of a group of Haredi Jews (or Haredim) during a festival in the Mea Shearim district of Jerusalem. The Haredim are Ultra-Orthodox Jews who consider their belief system and rituals to extend in an unbroken chain back to Moses.

I'm intrigued by some of the hats worn by these Haredim. The fur hats worn by some are called spodik while the flat ones are called shtreimel, however I can't figure those worn by the fellows on the left of the photograph which resemble white fezzes complete with black tassels.

The fez of course, is the well-known red hat with tassel of the Ottoman Empire, which was popular in its dominions such as Egypt, the Maghreb and some Greek islands. The fez was banned by Mustafa Kemal Ataturk as being regressive.
Posted by bella at 3:05 AM