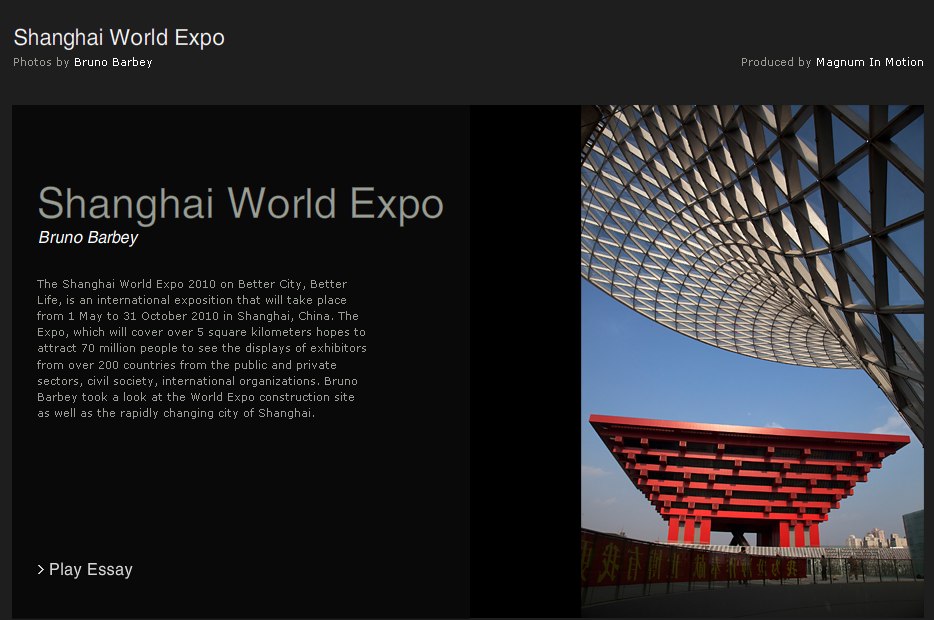 Not entirely travel photography related but Magnum In Motion is featuring an audio slideshow of Bruno Barbey's photographs of the construction of Shanghai's World Expo construction site and parts of its old city.

Shanghai saw the opening of the 2010 World Expo today, starting an event to herald the Chinese financial hub's return as a major world city after the spartan industrialism following the 1949 communist revolution.

According to the news reports here in the UK, no expense was spared and like the 2008 Olympics, the World Expo will showcase China's immense economic and geopolitical importance; almost bragging its power and influence.

I haven't been to Shanghai yet, but it's quite obvious the degree by which China has developed, and is continuing to develop its main cities. It's in stark contrast with the crumbling infrastructure of many large cities in the United States.

China is spending over $4.0 billion on the Expo itself, and many billions more on other improvements for this city of 20 million people. While in the United States, we are faced with economic difficulties caused by the mismanagement of the Bush Administration, the spectacle of hypocritical Tea Baggers and a catastrophic oil spill in the Gulf of Mexico.