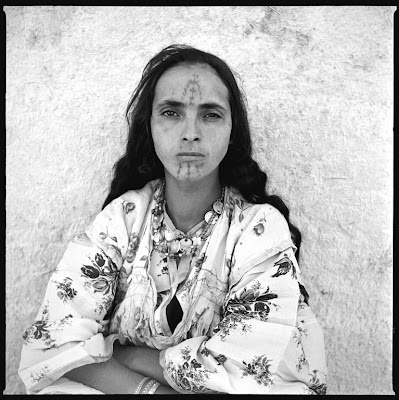 Photo © Marc Garanger -All Rights Reserved
Algeria's War of Independence from France officially lasted almost a decade, but its genesis goes back to the early 40s. It was one the bloodiest struggles against a brutal colonial power with over a million Algerians killed, with thousands interned in concentration camps. To this day, the French have not accepted responsibility for these crimes.

Growing up in my native Egypt and full of nationalistic fervor against colonialism, I remember quite well the admiration we had for the Algerian resistance...the names of Ben Bella, Boumedienne, Djamila Bouhired still easily roll off my tongue.

So it was with much interest that I saw recent coverage from photo websites and newsmedia on Marc Garanger, who was stationed against his will in Algeria, and managed to avoid combat by becoming a photographer in the French army. His job was to produce images for new mandatory ID cards, and villagers were forced to sit for him.

Less than a year later, Garanger's photographs of shamed and angry Algerian women would become a symbol of French oppression over its Northern African colony.

I left a comment of the New York Lens Blog which featured Garanger's work:

"the French colonialism/occupation of Algeria was one of the most brutal in history, and the Algerians' independence war cost over a million of their lives. in my view, the expressions of these women are principally of defiance, hatred of their oppressors, and rebellion. the women were combatants as well, as has been mentioned in the article. perhaps there's an inkling of truth in that they were ashamed to show their faces, but what i sense from these expressions is that they're telling the French "you'll soon be gone"...and they were right."

For further photographs, go to Algeria.com which has a number of large images of these Algerian women; some ashamed, some scared but many defiant.
Posted by bella at 2:27 AM