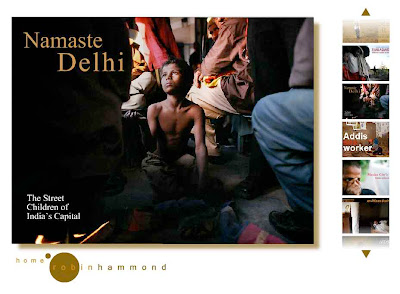 Here's Namaste Delhi, a photo essay on the street children of Delhi, India's capital city, by Robin Hammond, who presents his work in a flip book format. He has also written an essay on these children, so his photographs are arranged in magazine format, which is very attractive.

He tells us that most of the street children in Delhi are originally from Bihar (one of the poorest states in India), and that they're running from poverty, abuse and neglect. One of his photographs is of 12-year old Husina, who makes around 500 rupees a day from selling herself, is haunting. She wears earrings and a ring, probably bought with her earnings, but it's her expression that stays with me...a mask of indifference and resignation to her fate.

Robin Hammond is originally from New Zealand, moved to Britain in 2002, and now lives in London. He currently works for a number of national magazines and newspapers, NGOs and corporate clients. A number of his photo essays on his websites deal with street children, and other social issues such as AIDS and prostitution.

Take the time to explore Robin's other features, where you'll find his work on Addis Sex Workers, Mexico's City Children, and Zimbabwe.
Posted by bella at 4:50 AM