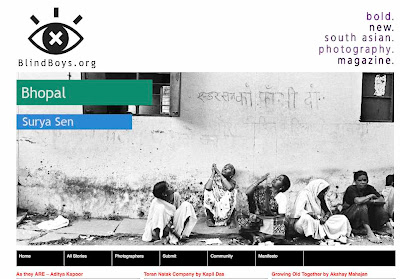 Blind Boys Magazine describes itself as being bold, new and South Asian. I'm unsure whether these photographers form a collective, or are just a group of photographers who seek an avenue to expose their diverse work to the outside world.

Aditya Kapoor's photographs reveal the lighter side of the often misunderstood Muslim community, Kapil Das' photo essay covers one of the last surviving traveling theater groups of Gujarat, while Akshay Mahajan explores the lives and uncertainties of a old couple in New Delhi’s new urban scape. Ishan Tankha photographs in a camp in Sri Lanka where 94 former child soldiers live with their supervisors, Surya Sen's photographs show us the aftermath of the Bhopal Gas Tragedy, and finally Ruhani Kaur finds Sophie Ashraf, a 21-year-old Muslim girl who raps.

posted "robotically" as I'm in Marrakech
Posted by bella at 3:14 AM