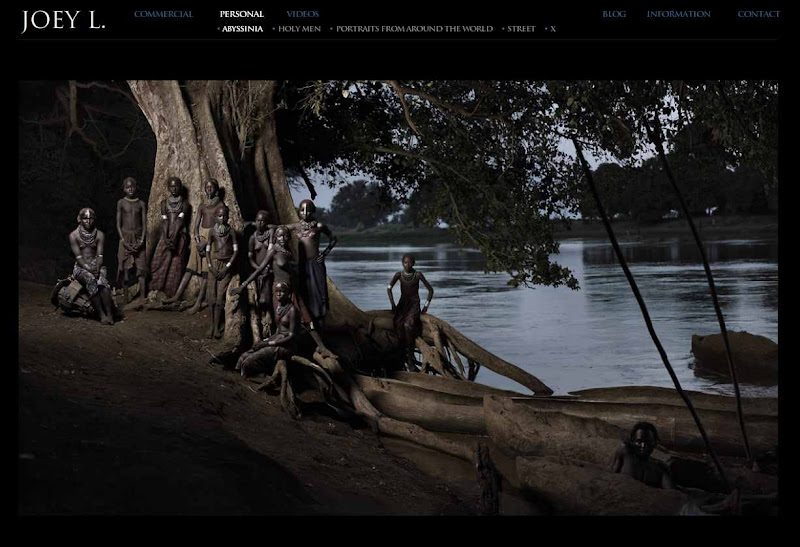 Once in a while, I come across work by a young photographer that is so interesting, so adventurous, so visually compelling, so extraordinarily edgy and so cerebral....that I spend many hours just staring at it. And yes, I'll admit it...it's so good that it's incredibly annoying. I'm a purist and certainly not a fan of photo manipulation, but the imagery I've seen by this photographer is really excellent.

Joey Lawrence is 19 years old (no, that's not a typo, he's really 19..or maybe 20 by now), and has been shooting commercial photography, photojournalism and music videos around the world by the age of 17. He already has a reputation of being a pioneer of new aged digital hyper-realistic photography, lighting and manipulation. All his techniques were self-taught or the result of trial and error with no formal educational training.

His website is replete with phenomenal photography: particularly his work in Ethiopia's Omo Valley of the Mursi and other tribal groups, as well as of Abyssinian Christian holy men, and in India amongst the Aghori sadhus (The Aghoris commune with the dead, live among the dead and practice rituals with corpses in order to make contact with the divine mother, Kali, to whom they pray). As a sideline, I wonder how Joey managed to get access to this secretive and reclusive sect!

I'm bookmarking Joey Lawrence's website for many repeated visits. What a talent by a young man who has his whole life ahead of him to produce incredible work both in terms of quality and content!


Here's a clip (about 11 minutes) of video of Joey Lawrence (he's on the left), his assistant and crew in Ethiopia...working and playing. You'll see how he photographs some of his subjects using strobes and lights. The clip was personally very entertaining because I recall being at some of the very same spots in and around the Omo Valley...Jinka has a special place in my memory because it's where I indulged in tej, the potent (make that very potent) home-made brew of fermented honey.
Posted by bella at 3:05 AM