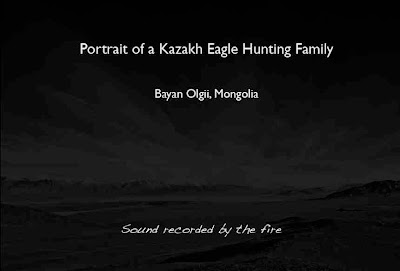 James Morgan is a travel and documentary photographer, as well as a professional writer based in the United Kingdom. Although he specializes in travel and documentary photography, he has also worked on a number of commercial projects. Amongst his many clients are The Sunday Times (South Africa), Foto8 (UK), Dalmatia Creative (UK/US), Baikal Club (Siberia) and others.

He recently documented a Kazakh eagle hunting family in the Altai mountains of Mongolia. Having published the resulting photo essay in a Soundslides format on Foto8, he writes that the spread of the Russian empire some 200 years ago sent many Kazakhs across the border into western Mongolia where they settled in the region of Bayan Ulgii. The current Kazakh government is offering financial and domestic incentives for these Kazakhs to return to their original homeland, but many decide to stay.

James Morgan's Kazakh Eagle Cultures can be seen of Foto8 (an excellent online photo magazine) or on his own website.

Note: The soundtrack is by Kawanduk playing a local instrument called dombra. It sounds very similar to a country & western song!
Posted by bella at 4:30 AM