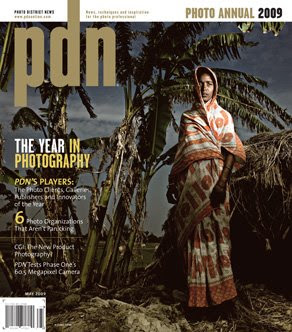 Here's an issue that came to my attention via the excellent blog Duckrabbit, which in turn noticed it on the Reciprocity Failure blog.

PDN (Photo District News) has recently announced the results of its Photo Annual 2009 Contest, and also introduced its readers to the 24 judges who adjudicated this hard fought contest. So far so good...however here's the rub: all 24 judges are white. Yes, you've read correctly....all of them are white persons.

Stan Banos at Reciprocity Failure continues his criticism by suggesting that the reasons behind this range from indifference to blatant passive racism. I don't know if I would go as far as to describe it as passive racism...perhaps it is, but my gut feel is that it's principally because of pervasive cronyism in the photography industry...a sort of comfortable "you scratched my back so i'll scratch yours" kind of thing. Of course, it may well be that only whites can scratch white backs.

Anyway, enough about what I think, and let's get someone make serious money by entering duckrabbit's competition and be the first who comes to PDN’s defense and answer Stan Banos' question as to ‘what possible, plausible excuse could exist for an all white jury from a publication of such influence?’.

A tough question to answer. Will Holly Stuart Hughes, the editor of PDN be that first responder? I hope so.

Note (June 10): Well, Holly Stuart Hughes did respond on June 9 to the various bloggers who raised this issue. Her reply is elegant and gracious and I believe is genuine. It can be read in full here, but here's an excerpt:

Yesterday some blogs circulated a note about the fact that of the 24 judges of the 2009 PDN Photo Annual contest, all of them are white. It's a valid point ,and one that everyone who works on PDN’s contests has given a lot of thought. While the lack of any judges of color wasn’t intentional, it is regrettable. Thanks to the huge number of entries it draws from around the world, the Photo Annual offers us our best opportunity to see a wide range of work from different perspectives. We should make sure our judges represent a wide range of perspectives as well.