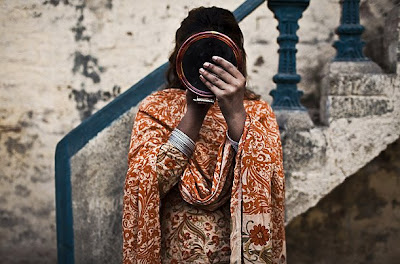 It's a welcome change from the current run of the mill photojournalism which we normally see in the mainstream media. I've had enough of seeing photographs of frightfully scary Islamic mullahs, with black beards and betel-stained teeth, which seem to delight photo editors, and are standard fare in our newspapers. So I cheer when I see diverse photo reports such as this one.

It seems that in its heyday years, during the 1970s, the movie studios of Pakistan churned out around 200 movies a year, but that has dwindled to a fraction because of the growing accessibility of Hollywood and Bollywood films. It is also threatened by the increasing potency of the Taliban in the northern parts of the country.

Zackary Canepari's toned photographs are always interesting, and he has done it again with this collection. I found some of the actors' photographs hilarious.
Posted by bella at 7:40 AM