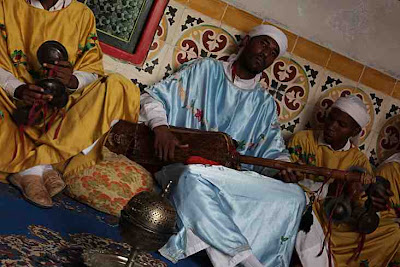 Photo © Tewfic El-Sawy -All Rights Reserved
Within a few steps from my lovely Essaouira hotel (Riad Mimouna) is the zaouia of Sidi Bilal, who was the first muezzin in Islam, and is the patron saint of the Gnawa order.

It is there that most of my photographs of the Gnawa performers are made. The backdrop of the zaouia is of traditional islamic zellige, and is just perfect. I've witnessed three Gnawa performance at the zaouia so far. The first was of the Gnawa Maalem Allal Soudani, the second was of the Tunisian Sidi Ali Lasmar Stambali, and the third of the magnificent Ganga de Zagora. The first two performances were of the Gnawa Maalems on the traditional guembri (a three stringed instrument), while the rest of the group provide the repetitive percussive accompaniment with the also traditional qarqab, which are the hand-held cymbals. The end of each session was particularly interesting as local women would join in the furious hand-clapping, add a special stone to the incense burner and eventually go into a trance.

The third Gnawa performance was of the Ganga de Zagora, which did not involve other than the qarqabs and drums known locally as t'abl.

The final performance tonight will be of the famous Maalem Ahmed Baalil, which will start at midnight and will probably end at 3 am.

While it's a tad premature, but I must say that the report card for the Gnawa Festival Photo Expedition is mixed. The reluctance and refusal of many Moroccans to be photographed is a considerable obstacle for people photography, and the harshness of the sun/light also makes it very challenging. Street photography in the medinas is possible, however the light conditions are not ideal. On the other hand, photographing the Gnawas has been a cinch (with one minor exception), and they are extremely photogenic and attractive. The music is remarkable, and its rhythm is impossible to resist. I'm girding myself for a longthy editing process once I'm back in New York to create a Gnawa multimedia slideshow, accompanied by ambient sound recorded during the performances.
Posted by bella at 11:30 AM