My Work: The Tanners of Marrakech 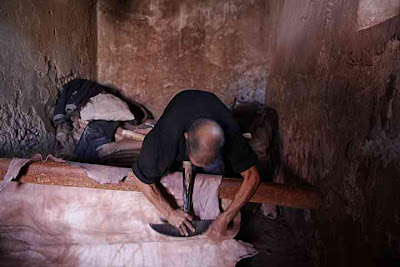 Photo © Tewfic El-Sawy -All Rights Reserved
As readers of this blog know, I'm leading a photo expedition in Morocco whose principal destination is Essaouira where we will be photographing the Gnawa Music Festival in a few days' time. The 9 photographers on this expedition are now in Ouarzazate, an ancient city south east of Marrakech and described as the gateway to Africa, and where we are photographing the various casbahs dating from the 11th century. I suspect that it's hardly the remote area it's hyped as, since the hotel here has an incredibly fast (and free) WiFi in its rooms.

We stayed in Marrakech for a couple of days, and the above photograph is of Mejid, a worker laboring in its famed medieval tanneries. The stench of the tanneries here puts off many visitors, but it hardly matters to workers like Mejid and his colleagues who toil for long hours in difficult work conditions. Visitors are handed mint leaves to place in their nostrils to filter the odor, but I declined and found that one gets used to it after a few moments.

Morocco, as expected, is a difficult country to photograph because of two main reasons: the harshness of its sun, and the general unwillingness of its people to be photographed. However, we are soldiering on and making the most of the experience.

Tomorrow, we make our way to Essaouira (a 7 hours drive) on the Atlantic coast and to attend the festival which lasts until month-end.
Posted by bella at 7:57 AM