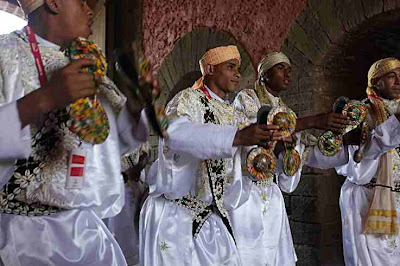 Photo © Tewfic El-Sawy -All Rights Reserved
The 2009 Gnawa (or Gnaoua) Festival in Essaouira officially started yesterday at 6:00 pm, when all the participating groups congregated at the medina's Bab El-Doukala for its inaugural procession through its narrow streets.

The various Gnawa bands were amply represented in the square just outside the Doukala Gate, and were being interviewed by the local press. Gnawa music is a mixture of sub-Saharan African, Berber, and Arabic religious songs and rhythms, and they displayed their talents while walking in the medina's streets. The procession was viewed by a large number of spectators, both local and tourists, although I noticed that some of the Essaouirites were irritated at having to wait until the processions passed through to go along their business.

I thought the best vantage point for photography was under the arches of Bab El-Doukala, where there were no spectators on the either sides to intrude in my shots. With one exception, I was the only photographer there and was left alone by the police who were shooing people away from the center of the alley.

Later on at midnight, we attended a "lila" in a nearby zaouia, a Maghrebi Islamic religious monastery, where the Maalem Al-Soudani and his group was performing for a small audience. The opportunities for photography were somewhat restricted by the administrators who initially claimed that it would interfere with the sanctity of the performance, then changed their tune to admit it was because they didn't want unofficial photographers to "commercialize" the events (ie only photographers approved by the Festival organizers were allowed to photograph).

I wish the organizers could have been candid and up front with the real reason, rather than using a religious or spiritual excuse, and confusing spectators.
Posted by bella at 1:41 AM