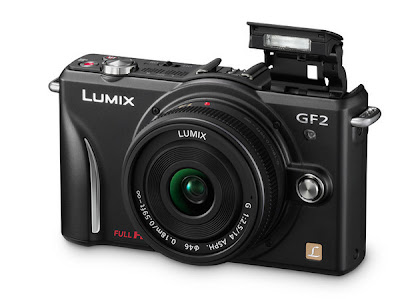 Aaaaargh! It seems that engineers love to spoil a good thing. Panasonic has just announced the Lumix GF2, the updated version of its excellent mirrorless, lens-swappable GF1.

According to WIRED's Gadget Lab, the new GF2 comes with an updated image processor for a maximum ISO to 6400, a do-all touch-screen control, and an upgrade to the HD video mode.

Moreover, the GF2's body is said to be 18% smaller and 7% lighter than its predecessor....which I think won't provide the satisfactory feel of holding a "serious" small camera as in the GF1.

The GF2 will go on sale in early 2011 but no price was announced yet. Thank you very much Panasonic/Lumix engineering staff...but I'll keep my GF1.

For a video comparison between the GF1 and the GF2 with a British perspective, drop by this website.
Posted by bella at 7:18 AM