In this post I want to do a short comparison between some apples and oranges. Clearly the above tools are very different when it comes to design and intended function. They are both saws, but designed for different scale of wood cutting.

First, a few words about what I have used here. I’ve been testing the modified version of the 24 inch Trailblazer. There is also a 18 inch one on the market. You can see the modification I’ve made here. For the testing I’ve also used a Kershaw saw. They are identical to the Bahco Laplander, except for the handle color. As far as I know they are the same tool, just marketed as Kershaw in the US. Bahco also makes a pruning saw which is identical to the Laplander, except for the handle color. 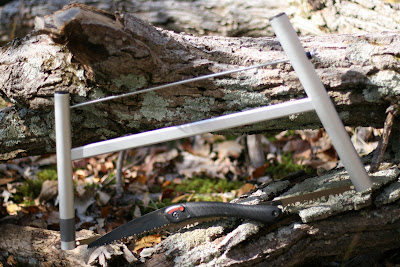 The Bahco Laplander weighs 6.35oz. There is a lot of confusion when it comes to marketing the saw. You will see it described as being a 7 inch saw in some places and a 9 inch saw in others. The reality is that the blade is 7 inches long, while the whole closed saw in 9 inches in length. The Bahco Laplander costs about $35. You can get the Kershaw or the pruning version for about $25. Unfortunately, paining the handle green makes it a bushcraft saw, and you have to pay the appropriate bushcraft tax.

I tested the saws on a 3.5 inch branch of hickory by timing the cuts. The Bahco Laplander cut through the branch in 2 minutes and 5 seconds (125 seconds). The Trailblazer cut though it in 17 seconds. For comparison purposes, it took me 1 minute (60 seconds) to chop through the same branch with a Gransfors Bruks Small Forest Axe.

Obviously I am comparing two very different tools. The Trailblazer is much, much faster than the Bahco, more than seven times faster. However, it is more than three times heavier.

Is it worth carrying the extra weight? For me it is. Even though it might appear that you can just use a Small Forest Axe, the saw is more than three times faster. This adds up when you have to cut more than one log. It also requires a lot less energy to use.

What I’ve done is move from a Small Forest Axe and Kershaw saw combination, to a Trailblazer and Husqvarna hatchet combination. For me it has been a good move. Whether or not it will work for you will depend on the type of tasks you perform, and what you enjoy doing.
Posted by bella at 4:27 AM