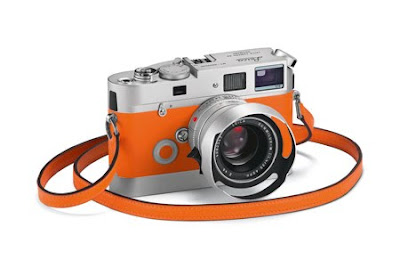 From the British Journal of Photography comes the news that Leica M7 Hermès edition has just been announced representing a collaboration between Leica and Hermès Paris. My readers may be interested to know that only 200 units will be available...and to make it even more exclusive, only 100 will be in orange and 100 in a green.

The Leica M7 Edition Hermès will be available in the UK from December 2009 from authorized Leica dealers at the suggested retail price of £8550 (or $14,000).

I really (I mean really as in seriously) hope to come face to face with whoever has such a camera dangling around his or her neck. It's not about the jaw-dropping price (although that's a stunner), but about the crass ostentation that it exudes. I'm reasonably certain that Leica has done some market research, and knows that there is a minuscule number of people who may be attracted to the Leica M7 Edition Hermès.

I have some ideas as to what demographics these people may belong to...but I still would like to see one, and then roll on the floor laughing.

On a more sober note, I suppose that this is more of a collector's item, like a great vintage wine or whatever it is that people collect these days. It's not really a camera that'll be used much. After all, the leather cover might get scratched!
Posted by bella at 3:33 AM

Email ThisBlogThis!Share to TwitterShare to FacebookShare to Pinterest
Labels: Rants