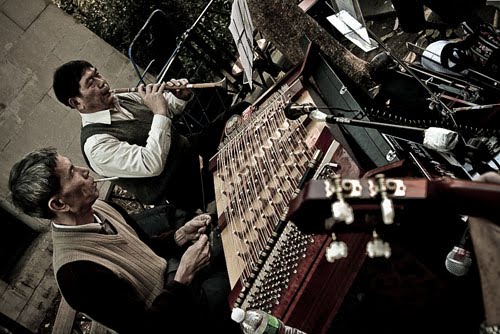 Photo © Tewfic El-Sawy-All Rights Reserved
I thought New York City's weather on Sunday was just perfect for a few hours of street photography on Chinatown's Mulberry Street, but ended up spending an interesting time at Columbus Park (Mulberry and Bayard). This is the only park in Chinatown, and is built on what was in the 19th century the most dangerous slum area of immigrant New York. 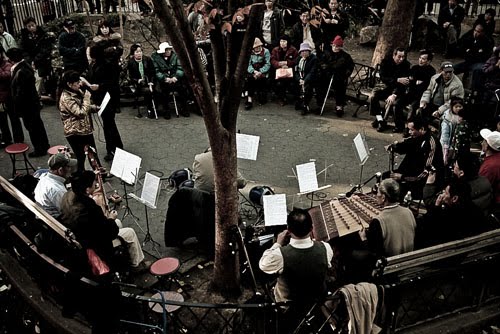 Photo © Tewfic El-Sawy-All Rights Reserved
Now, it's the venue of choice for hundreds of Chinese residents, a few of whom I saw were practicing tai chi, while others (mostly women) were playing mahjong and card games, and groups of men were engaged in numerous games of xiangqi. Many more occupy the benches, socializing with their neighbors or with strangers, listening to the songs of birds in their cages. 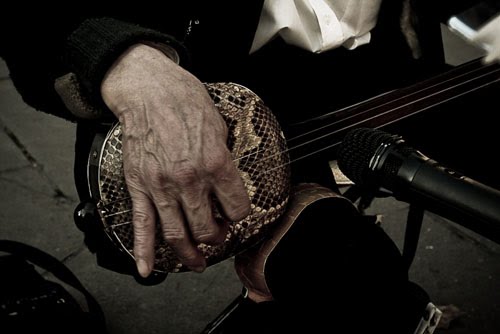 Photo © Tewfic El-Sawy-All Rights Reserved
At the corner of Mulberry & Bayard, there was a large band of traditional musicians accompanying a handful of elderly Chinese opera singers, surrounded by an appreciative audience. I had come prepared...and brought my audio recorder to capture its unmistakable sounds. The musicians used a panoply of Chinese traditional musical instruments, such as the yangqin, a sort of dulcimer with a near-squared soundboard, and played with two bamboo sticks, as well as the jinghu, a small two string fiddle, a circular bodied plucked lute called the yueqin and the recognizable gu and ban, a drum and clapper.

I was racking my brains all evening trying to remember the title of the movie that featured Beijing opera characters, and which won the Cannes Palme d'Or. It's Farewell My Concubine, the 1993 Chinese film directed by Chen Kaige, and adapted from the novel by Lilian Lee.
Posted by bella at 3:09 AM

Email ThisBlogThis!Share to TwitterShare to FacebookShare to Pinterest
Labels: Events, TTP Show Off