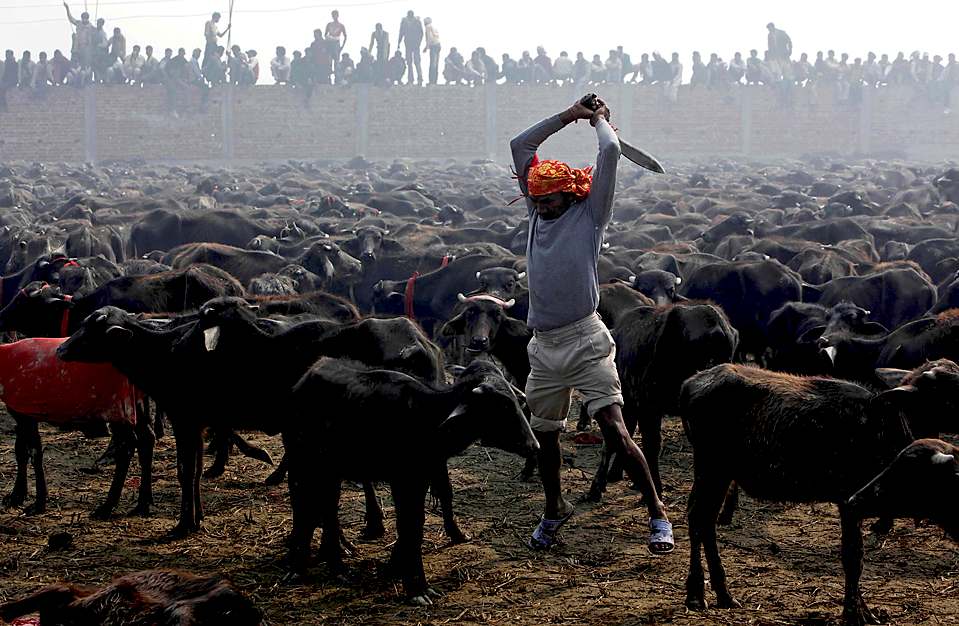 Photo © Gemunu Amarasinghe/AP/Courtesy WSJ-All Rights Reserved
Here's a thought to coincide with Thanksgiving, one of our most hallowed of celebrations.

The Bariyapur festival (also known as the Gadhimai Mela) has been in full swing in Nepal for the past few days. As you can read in the following excerpt, the age-old festival involves slaughtering of thousands of animals as sacrifice to a Hindu goddess of power.

The ceremony began with prayers in a temple by tens of thousands of Hindus before dawn Tuesday. Then it shifted to a nearby corral, where in the cold morning mist, scores of butchers wielding curved swords began slaughtering buffalo calves by hacking off their heads. Over two days, 200,000 buffaloes, goats, chickens and pigeons are killed as part of a blood-soaked festival held every five years to honor Gadhimai, a Hindu goddess of power.

Animal sacrifice has had a long history in Nepal, an overwhelmingly Hindu country and, until recently, even in parts of India. Notwithstanding, animal-rights protesters from all over the world have decried and criticized this religious tradition as barbaric and atrocious.

My knee-jerk reaction when I saw this photograph on the Wall Street Journal's Photo Journal was one of revulsion, but then I remembered that we, in the United States, will consume 45 million turkeys for Thanksgiving alone...and while the slaughtering methodology may be slightly different, it's still an uncomfortable parallel, isn't it?. If you need to be reminded, you can always look for the clip of ever-hilarious Sarah Palin giving a press conference while a couple of turkeys were being "prepared" in the background.

And for the religious-minded, let's not forget The Binding of Isaac, in Genesis 22:1-24, which is the story from the Hebrew Bible in which God asks Abraham to sacrifice his son, Isaac, on Mount Moriah, but an angel intercedes at the very last minute, and Abraham then sacrifices a ram (who, as luck would have it, was placidly munching grass around the corner) instead.

Similarly, Islam requires Muslims to offer a sacrifice by slaughtering a sheep, cow, or goat during the Festival of Sacrifice or Eid el-Adha. It similarly commemorates Abraham's readiness to sacrifice his son Ishmael (not Isaac as in the Hebrew Bible) in the name of God, who sent a ram instead, thus sparing Ishmael's life. To this day, thousands upon thousands of bleating sheep are slaughtered in Muslim countries because of a religious tradition originating from the Hebrew Bible. Interesting, huh?

As I said, just a thought on this Thanksgiving day. Have a nice one.
Posted by bella at 3:13 AM